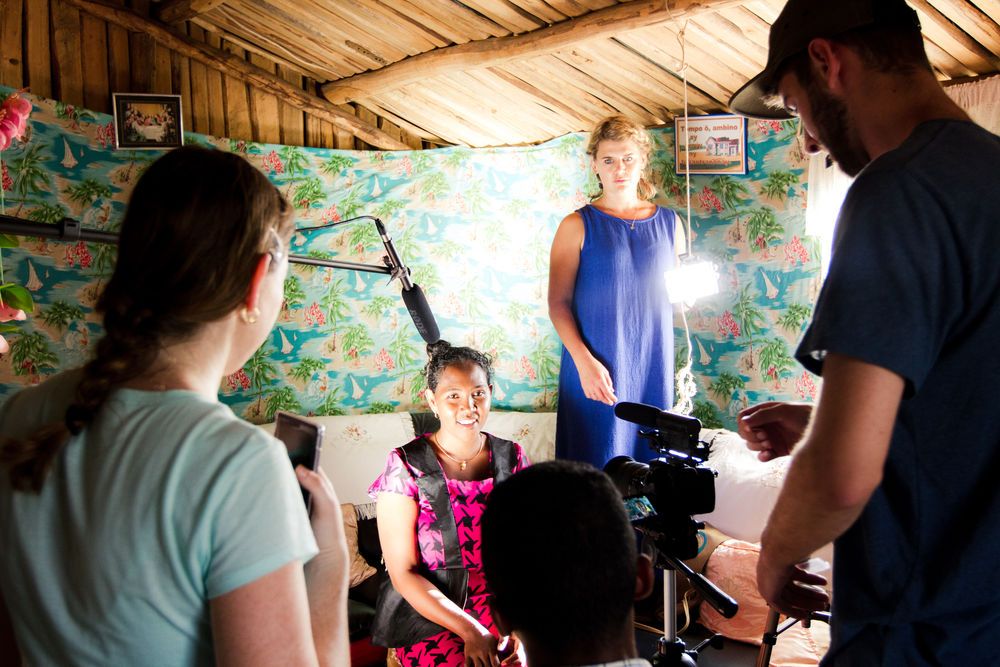 Madagascar: Media Trek participants interview a woman in Ambovombe, Madagascar. The Media Trek is a 2.5 month outreach where participants use their media skills to bless OM bases and gain exposure to missions.
“Before Media Trek I thought: media--cool hobby, but not necessarily missional,” admitted Kotie-Alet from South Africa.

Missions was not a new concept for the missionary kid. Raised in her native South Africa and Mozambique, Kotie-Alet served on board Doulos for two years when she was 18 and has volunteered in the media and communications department at the OM base in Zambia where her parents serve.

Despite her initial response, Kotie-Alet signed up for Media Trek after hearing about it from a friend who was participating himself.

A two-and-a-half month outreach, Media Trek is designed for media-minded people. In its inaugural run in 2017, the team of six travelled to South Africa and Madagascar, visiting different OM bases and non-OM ministries, filming videos to show the work God is doing in Africa. Representing five nationalities, participants learnt to work and live cross culturally alongside local missionaries.

“I was most impacted by the missionaries in the south of Madagascar,” Kotie-Alet said. “When I explained to my sister how they lived, she was like, ‘Wow, they are like the Hudson Taylor’s of missions work today.’ I was challenged by their level of commitment and love for the people despite it being a difficult culture.”

Team members were challenged in different areas of life: from living in tight quarters to washing laundry by hand, from getting up early to do daily devotions and preaching in churches, from long bus rides to video equipment malfunctions.

“We had this saying that [everything would] happen by faith,” remembered Kotie-Alet. “Initially, I thought it was just jargon, but as the Media Trek continued, I realised so many things can change. There are things we can’t plan for and you can only trust and live by faith. I thought learning to live by faith practically was super valuable.”

By the end of the outreach, the team had made nine videos.

“Through the Media Trek I saw the power that media has--it can really impact people. It can tell a story that hasn’t been told, generate income and be evidence of what God is doing,” said Kotie-Alet. “I am taking media in missions seriously now, and it’s something I would love to continue doing. I am jumping in, Lord willingly, and pursuing that. [The Media Trek] changed how I see the future and how I see me in the future, doing what I love, for God’s glory.”

Check out OM Africa's youtube channel to view a few of the Media Trek's videos.

Published: Friday, 22 September 2017
Credit: Rebecca Rempel
© 2017 OM International This email address is being protected from spambots. You need JavaScript enabled to view it.