Football and the least reached 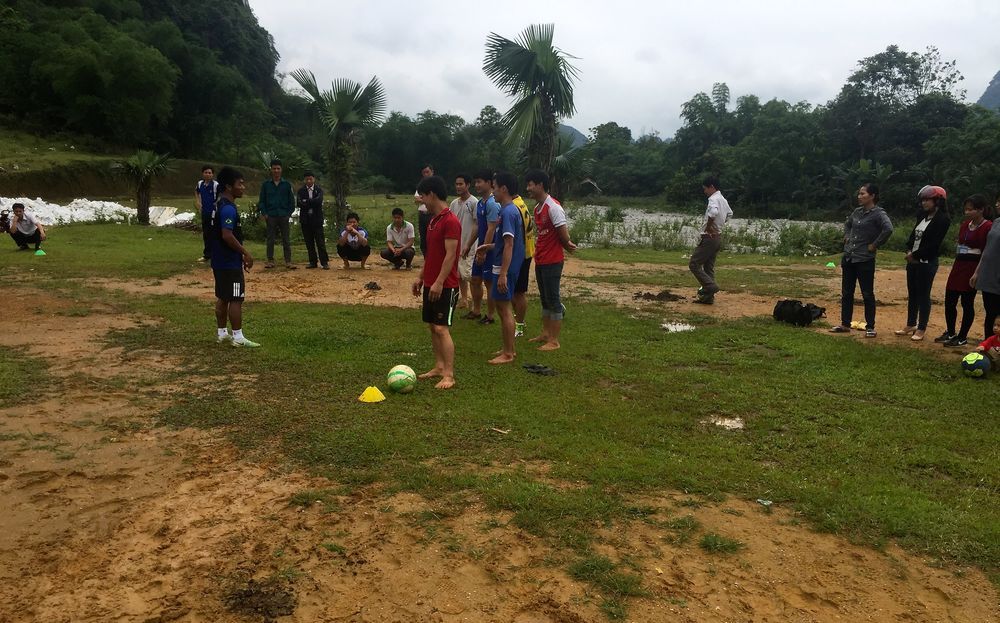 Vietnam: The OM team in Vietnam uses sports as an open door to minister to those who dont know Jesus.
“God sent you here for a reason!” the Brazilian man said to John*, his Canadian friend. Together they stood in a remote village in Vietnam, while a local elder excitedly asked to show them the kindergarten that the Canadian embassy had helped turn from a one-roomed school into a better facility. Both foreigners worked for a Christian football academy in Hanoi and had been invited to visit the home village of one of their assistant coaches, Tim*, in the restricted Yen Bai province. Tim and his community are part of the Tay, a people group in Vietnam among whom there are almost no known Christians.

Tim, who came to the capital city to find work, has been working at a football academy that OM, with other partner organisations, is using as a tool to reach young people with the gospel. Apart from work at the academy, international coaches meet with 10 to 30 young men, ranging in ages from 16 to 35, twice a week and lead them in prayer, learning new football skills, competitive games and informal times of sharing.

While working as a car washer, Tim met one of the Brazilian football coaches, who realised Tim was Tay, the people group the ministry was seeking to reach. Tim accepted the invitation to join the football training and then later to attend church. When he accepted Christ as his Saviour, Tim’s life turned 180 degrees--from one of addiction to alcohol and cigarettes, to one fully committed to Jesus. Through Tim’s transformation, his wife also became a believer three months later, and the football coaches encouraged Tim to work with them as a coach to disciple others, specifically to see his own community transformed by God.

When Tim’s village elders heard about the Brazilian Football Academy, they invited the foreign coaches to provide training for their police football squad. And when the elders discovered that John was Canadian, their excitement grew. They proudly showed him the school and then asked if the coaches would help build a sports facility for the community.

In rural villages like this one, drugs and alcohol use lead to the demise of many young people. With little to do in terms of entertainment, a high percentage of youth make poor decisions. “Many of the kids lose their teeth by the age of 10,” shared John, “due to poor nutrition, high sugar cane consumption, and early alcohol drinking habits."

To combat these trends, village leaders decided that a sports facility would help engage youth in the community in a positive way.

OM is now in conversation with the Tay village leaders about building a football field and facility that can withstand the torrential rains common in that area. The project “just landed in our laps. We haven’t done too much, but it really was an open door that just kind of happened due to God-sent relationships,” John explained.

The opportunities for ministry in this remote area, among people with no church, are endless. “The sports facility will be an open door to run English programmes, community medical programmes, and so much more!” John explained. “But we are looking for a Christian family to help; someone who can move to this village, and facilitate the future ministry opportunities.”

Published: Friday, 22 September 2017
Credit: Ellyn Schellenberg
© 2017 OM International This email address is being protected from spambots. You need JavaScript enabled to view it.