On a road to hope 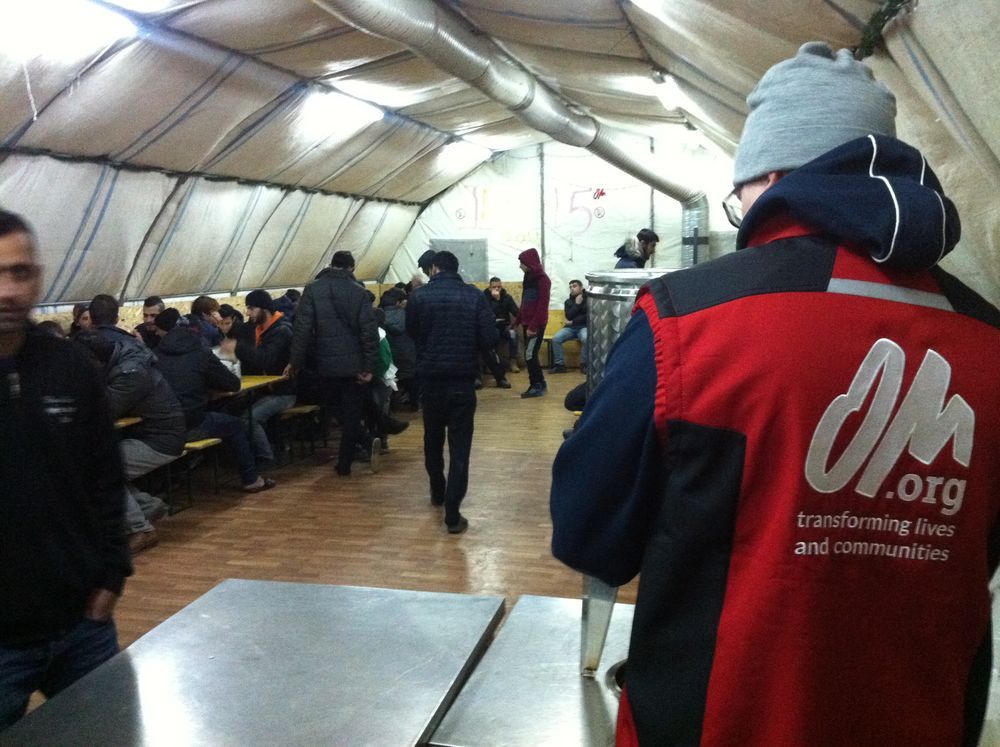 Serbia: OM staff and volunteers serve refugees in Serbia, making over 3000 cups of tea each day!
“On my first day at the camp, I didn’t know what to expect,” shared Debora, a 29-year-old fashion editor from Mexico. “The first task of the day was to brew the first pot of tea. On my way to the tent, many people noticed that I was new and came up to me inquiring where I’m from, my name, as well as, why would I travel from so far just to serve them tea?”

Debora first served as a volunteer in OM’s tea tent in the refugee camp near Šid, Serbia in March 2017. God then brought her back two more times in 2017 to volunteer, and in January 2018 Debora will serve with OM in Serbia for another six months. What is this place and who are the people that have impacted a young woman from Mexico so deeply?

The refugee camp near Šid, Serbia is on a highway close to the border with Croatia. This place used to be just a resting spot for the refugees as they journeyed north, but since Croatia and Hungary closed their borders, a thousand-plus refugees are living in a rundown hotel, hoping to yet be granted asylum in Germany or some other Western country. OM’s ministry is to make and serve tea to these refugees in a tent that also is the only common room they have in the camp. The work in the tent is part of Safe Passage, the ministry that was created to help refugees during their trip through Europe, by giving them food, clothing, basic need items and showing them God’s love during this difficult time. Over six million Syrians have fled their country in the past few years due to violence. People from Afghanistan, Iran and Iraq have also fled the region, creating what has been called the worst refugee crisis since WWII.

Later on that first day back in March, Debora met Samia*, a five-year-old Afghani girl. “She asked me to be her friend,” recalled Debora. “Everyday she would pick me up at the tent and walk with me around the camp, telling stories about her family and how they arrived here. She told me that she wanted to be a doctor and go back to Afghanistan. All the children with whom I spoke, shared that their greatest desire is to study and go back home.”

Although most people in the camp come from somewhere between the Middle East and Central Asia, Debora also met someone with a Latino background. “Ramon* is an 11 year old boy from Cuba. He has been with his family for seven months in the camp, waiting to go to Spain. He misses the warm weather, food and being able to speak in Spanish,” she added. It was a pleasure for her to be able to speak Spanish with him for a while.

Each day is the same for the refugees in the camp, she noticed. “They drink tea, walk, and wait -  wait for the moment that they are told they are next on the list. That moment that means that soon they will be able to leave to begin anew. They do not lose hope, but eagerly wait for that moment.”

Debora shared what God taught her during her time as a volunteer in Serbia. “At the end of my time in the camp, I realised that we should never underestimate what the Lord is doing in our lives. What we say, how we treat others and the way we handle adversity are the tools that God uses to reveal himself to the world.”

It does not matter how we help, she said. “We can be praying, giving and going. No action or step is too small, not even a cup of tea.”

Please pray for the OM team working in Serbia as they continue to show God’s love to the world, one cup of tea at a time. Pray for Debora as she prepares to leave Mexico for six months of service in Serbia, and ask God if He wants you to volunteer too…

Published: Friday, 05 January 2018
Credit: OM International
© 2018 OM International This email address is being protected from spambots. You need JavaScript enabled to view it.