The most precious gift 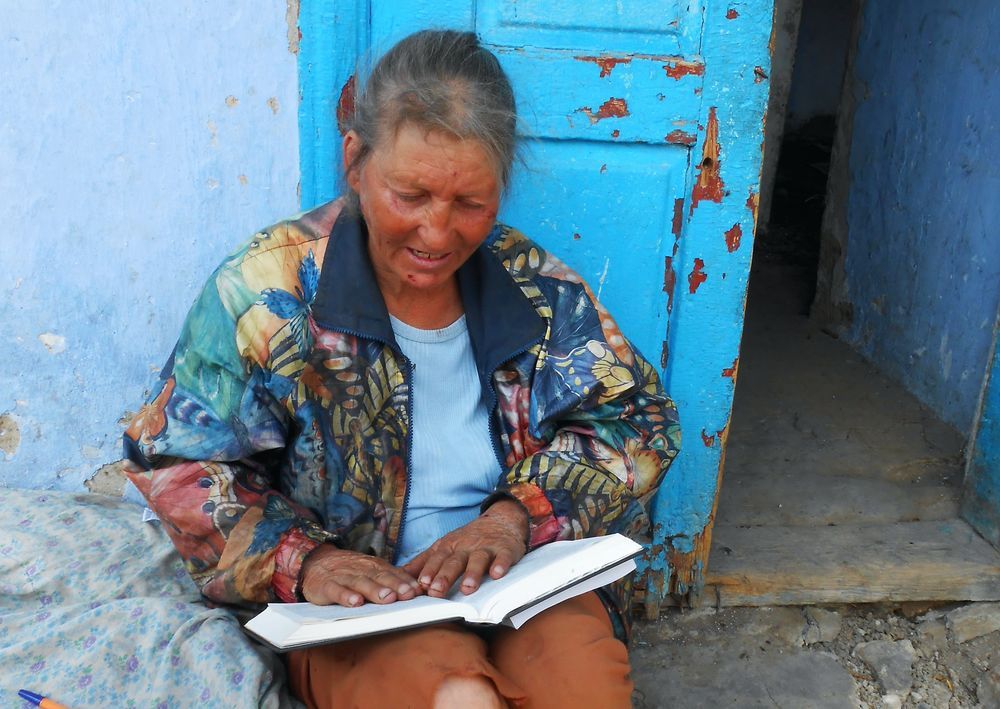 “The lady we visited was deaf; she had dried blood on her hands and face and a soda bottle holding the liquid seeping from her body,” one outreach participant shared. “Her house was in shambles and by far the worst condition we came across. During the visit, it became clear that she was facing abuse from her son and others. My heart broke immediately.”

The outreach team visiting this lady could only communicate by writing down what they wanted to say. The woman could read well and reply to them verbally but told them she had lost her hearing during a seven-month hospital stay, while being treated for tuberculosis. Even now her health did not allow her to work or take proper care of the house, a circumstance greatly aggravated by her son’s alcohol addiction and resulting violence. When the team told her they had brought her a food parcel and a Bible as gifts, she was overjoyed.

“Nobody visits me,” she said, “but you have come, even from a different country, and also brought a gift for me—a Bible, God’s Word!”

When she declared that she would start reading it right away, someone on the team reached out to open her Bible to a specific passage they wanted to show her, but the lady misunderstood the gesture. Clutching the Bible tightly to her chest she exclaimed: “No, don’t take it away again! It is mine; you gave it to me as a gift!”

When she was made to understand their purpose, however, she was very happy to read the suggested verses—and continued to ask every single team member in turn to show her another verse.

As happens every year, dozens of outreach teams went out into Moldovan villages as part of OM’s Love Moldova outreaches. They trekked, cycled or rafted to some of the least reached places of the country, sharing God’s love through running camps, building playgrounds or visiting the poor and neglected—bringing material help as well as encouragement and hope. Often the teams did not find it easy to be confronted with the harsh living conditions of the people they visited; the help they brought seemed little compared to the need. Yet again and again, they were amazed at how much a simple visit meant to these people and what appreciation was shown for the gifts of food, a Bible or prayer.

Some people hesitated to accept prayer, but only because their tradition had taught them they had to pay for it. “One lady told us she wanted to have Jesus in her heart and home but did not have enough money to pay the priest to pray for the home,” one participant explained. When these people understood the team offered to pray for them without expecting payment, and even shared that they themselves could come to God in prayer, they were very happy to accept their offer.

Many teams saw how their visits brought change. Change for the depressed lady with pain in her legs, whom the team prayed for and the next day saw feeling better and full of joy. Change for the man who was grumpy and seemed not at all interested, but as the team left was sitting there with a smile on his face, reading the Bible they had just given him. Change for the lady who told them she wanted to die, but by the end of the visit had accepted Jesus and declared that she was no longer alone and now wanted to live for Him.

At the end of the outreaches, many more similar testimonies were shared about the old, the poor and the abandoned who had been visited with a message of hope. Maybe their outward conditions had not changed that much, but inside their hearts a much more significant transformation had taken place!

Published: Thursday, 21 December 2017
Credit: Esther Hippel
© 2017 OM International This email address is being protected from spambots. You need JavaScript enabled to view it.