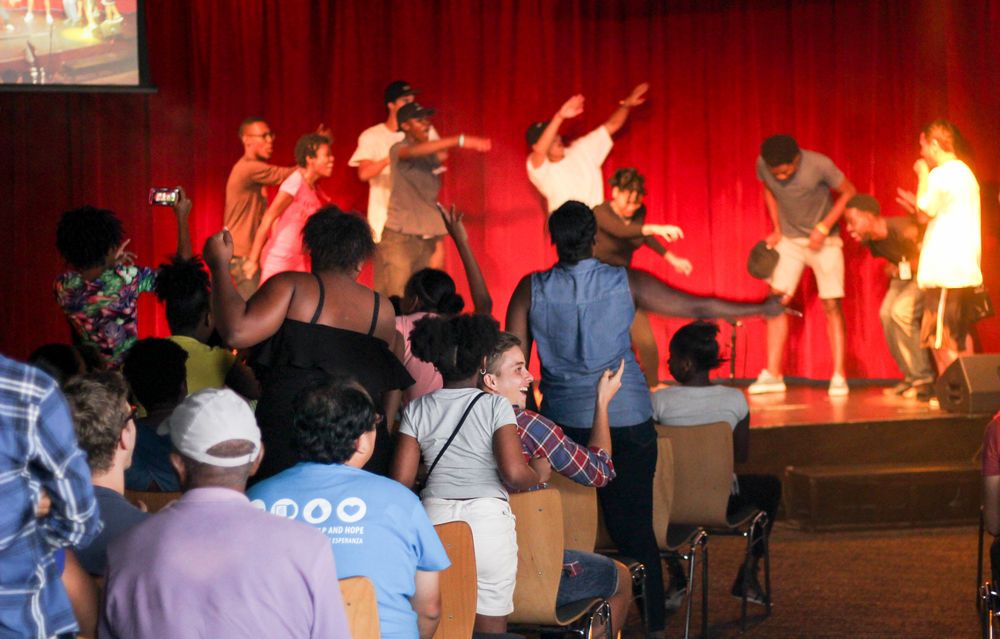 Saint Lucia: Vieux Fort, St. Lucia :: Crewmembers dance with visitors during an event on board.
Saint Lucia’s young Christians have been challenged about how they can become more involved in world missions at an event on board Logos Hope.

Ready, Set, Go! was a dynamic experience to appeal to people between the ages of 13 and 30 on a Saturday night in Vieux Fort, in the less prosperous southern part of the island.

The Hope Theatre was filled for the event, with the ship’s community having gotten the word out through social media, as well as through contacts from the island's churches.

A local rapper, Arnold Jules (AJ) and his wife Patrice performed a song they had written especially for the event, entitled 'Ready, Set, Go!' Its lyrics were a call to action, challenging those listening to examine what they were doing with their lives and explaining the need for more missionaries to go and share the hope of Christ.

“The rap song was really well-received by the Saint Lucian young people,” said the event’s coordinator, Priscilla Nakhla. “Everyone was standing, jumping and clapping, they were so into it!”

Three of Logos Hope’s crewmembers shared their own experiences of how God sent a missionary into their life to bring them closer to Him. They explained that it didn’t have to be someone from a mission organisation; it could just have been a friend or someone they worked with – demonstrating the point that anyone can be a missionary, as in fact, all Christians are called to be.

The youth were given a time of reflection, in which many wrote down a commitment they personally made on the evening. Suggestions they were invited to consider included: making a pledge to pray for a missionary, praying about going into missionary service themselves or offering support to the persecuted Church in another part of the world.

The commitments were sealed in envelopes with the writer’s name and address on them. The box of envelopes was handed to representatives of the Saint Lucia Youth With A Mission (YWAM) office and a local Bible college; whose staff will be mailing the letters back to their writers in a month’s time, as a reminder of their commitment and a spur to act on it.

Published: Tuesday, 07 November 2017
Credit: Julie Knox
© 2017 OM International This email address is being protected from spambots. You need JavaScript enabled to view it.