A word in season 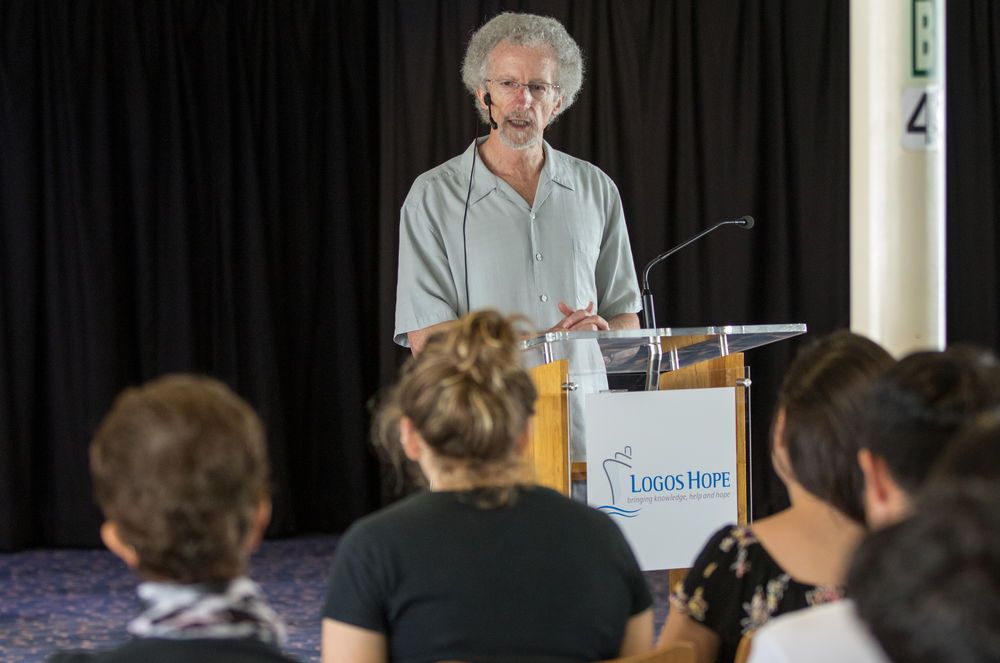 While Mr. Yancey and his wife, Janet, have a longstanding connection with Operation Mobilisation; this was their first visit to see the Ship Ministry in action.

As well as seeing many of the author’s own books on the shelves of the world’s largest floating bookstore – and marvelling at the discount prices which ensure they can be made available to all – the couple had the opportunity to connect with local people on the island. They also spent time in each of Logos Hope’s departments and met the volunteers serving at sea.

“It’s an amazing enterprise,” said Philip, of the ministry. “While some of the crewmembers make me feel very old – I’ve been told the average age is 22 – I’m impressed by their commitment. Raising their own financial support in many of the countries they come from is a very difficult thing. They’re committed to the mission and the vision of the ship, at some personal sacrifice – but as Jesus says, you think you’re giving away your life; you actually find your life.”

The American writer valued the perspective the international volunteers gave him, as an insight into Christianity across the globe:

“In the United States, it’s easy to get stereotypes of the rest of world; so we assume the Church in Europe is dying. In certain countries like China, Christians are being persecuted. In Japan, there are very few Christians, and in Russia, the state Church is kind of ‘squelching’ mission work. You hear these things, and I’m sure there’s truth behind some of them, and yet, God has His people in every one of these places – and as I understand it, serving on the ship is kind of like the goal of every person who knows about OM. There are a lot of assignments you could do; but if you can get on the ship, that’s the one!”

Commending the crew who had recently been in hurricane-hit territory, ministering to people who had lost everything; and who are now gearing up to communicate with people in the Spanish-speaking countries the ship will be visiting next year; the former journalist delivered several seminars to encourage the ship’s community.

Speaking on topics including Does prayer make a difference? and Where is God when it hurts?, Philip told stories from his own experiences of interviewing people, with biblical applications that resonated with the volunteers on board.

“I’ve been dealing with these questions for many years, so I’m trying to get across anything I’ve learnt that will equip them as they visit people and deal with these issues directly,” he said.

Those serving on board Logos Hope gave the Yanceys a warm welcome to their floating home. The couple are keen travellers, with Janet having grown up as a ‘missionary kid’ overseas. They enjoyed chatting with people from all over the world as Philip signed copies of his books.

A reminiscence the writer left the crew with drew on his experience of spending time with a leprosy doctor who told him that the healthiest body is not the body that feels no pain, because that is what leprosy causes in a diseased body. Rather, the healthiest body is the one that feels and attends to the pain of the weakest part. Philip likened this to how a community of Jesus-followers, the body of Christ, should function.

“May this encourage you as you aim to be the hands of Christ,” he said, “as you reach out and touch hearts that will reach to heads and impact those you meet with the realisation of the gospel.”

Published: Wednesday, 15 November 2017
Credit: Julie Knox
© 2017 OM International This email address is being protected from spambots. You need JavaScript enabled to view it.

Bridgetown, Barbados :: Schoolchildren fall for the tricks human traffickers could use on them - and are warned of the consequences by a team from Logos Hope.