More than a pay check 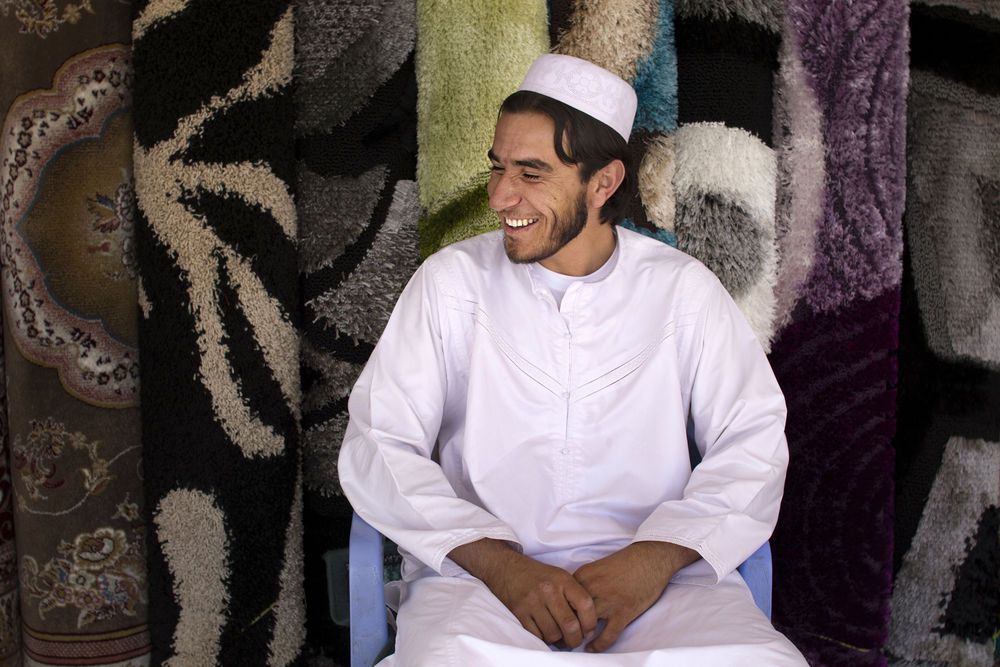 Arabian Peninsula: Man selling rugs in the local market. Photo by Kathryn Berry
“If you look at the Arabian Peninsula, there are [expatriate] Christians who work in many facets all over the region,” Sasha* said. She and her husband, Craig*, long-term OMers, have lived in their host country for ten years. Craig has always worked full-time, while Sasha has alternated between working and taking care of her family.

Having marketplace jobs allows Christian workers to overcome credibility challenges by providing them a legitimate reason to be in their host countries. Salaries supplement (or supply) financial income. Working with locals also allows them access to least reached communities.

However, simply earning a pay check from a local company isn’t enough.

“You can work, and the work can use you. But if we don’t ever get around to telling them why we’re different, they’re never going to know. Therein lies the intentionality,” Sasha explained. “The way you make your choices, how you spend your time, how you’re praying—all of that is built into being intentional.”

Workers need to evaluate their job environment to know how openly they can share onsite (some employers require a commitment to not speak about Christ at the workplace), but there are often subtle ways to introduce biblical truths.

Craig, for instance, posts a Bible verse from Proverbs on the board in his office. “He never says anything about it, but it’s up there,” Sasha said. “Others will come and comment on it. Spiritual conversations come up a lot.”

Questions can help local Muslims along their journey to Christ. Ask “Why do you pray five times a day? Why do you slaughter a sheep?” Sasha suggested. “If we can get locals to seek and question what they believe, they’re moving closer to finding the truth.”

While workers hope to share the complete gospel with local colleagues, sharing a short story or biblical idea is also worthwhile. “I’ve shared 1 Corinthians 13…as a definition of love,” Sasha said.

One college student, upon hearing the passage, remarked, “I don’t think, by this definition, that I’ve loved anyone.”

Later, talking about marriage, the student asked Sasha how she and Craig had been married so long. “It’s because we’ve been following Christ’s example,” Sasha said. “That definition of love I told you? That’s actually the definition of love that comes from the Bible.”

During one season, Sasha and Craig could not speak about Jesus at their jobs. But they could carry those conversations off site.

For instance, when a colleague needed surgery, Sasha went to the hospital to visit the lady and pray for her. After a few days, Sasha returned to check on her. The woman excitedly asked, “Do you remember when you prayed for me in the hospital? Well, you didn’t know it, but I was praying with you.”

She mentioned that when Sasha came, her family didn’t have the money to pay for the surgery. But after Sasha’s visit, the finances came together. “She recognised that it was an answer to the prayer she had been praying with me,” Sasha noted.

“I can explain why you had a quick answer to prayer,” Sasha told her. “I prayed in Jesus’ name. Our Bible says that He sat down at the right hand of God, and He intercedes for those who ask. Your prayer went along with mine straight to God.”

Denis*, another OMer who has lived in the Arabian Gulf for 11 years, has recently discovered interesting opportunities to intentionally share with colleagues since switching jobs. First, he started a prayer group with other believers at his work. Secondly, he introduced biblical principles to his new team.

“It’s important to speak the truth in love,” Denis told to his employees. One of the men later recounted the result of that truth: “I tried it, and it worked, so now I take that [principle] for me!”

Denis also talked about the idea of integrity. “Do you think we can be a team of integrity?” he asked.

Soon, one of the local employees needed to present a bid to a vendor. He wanted to embellish the offer to make it more attractive to the vendor, but Denis discouraged him from lying. In the end, the vendor accepted the proposal, “and he very much appreciated our honesty,” Denis shared.

At the work place, “people take small things [to heart] and they have a big impact,” Denis said. “You see all these things that God is doing without [us] realising it.”

Published: Wednesday, 22 November 2017
Credit: Nicole James
© 2017 OM International This email address is being protected from spambots. You need JavaScript enabled to view it.