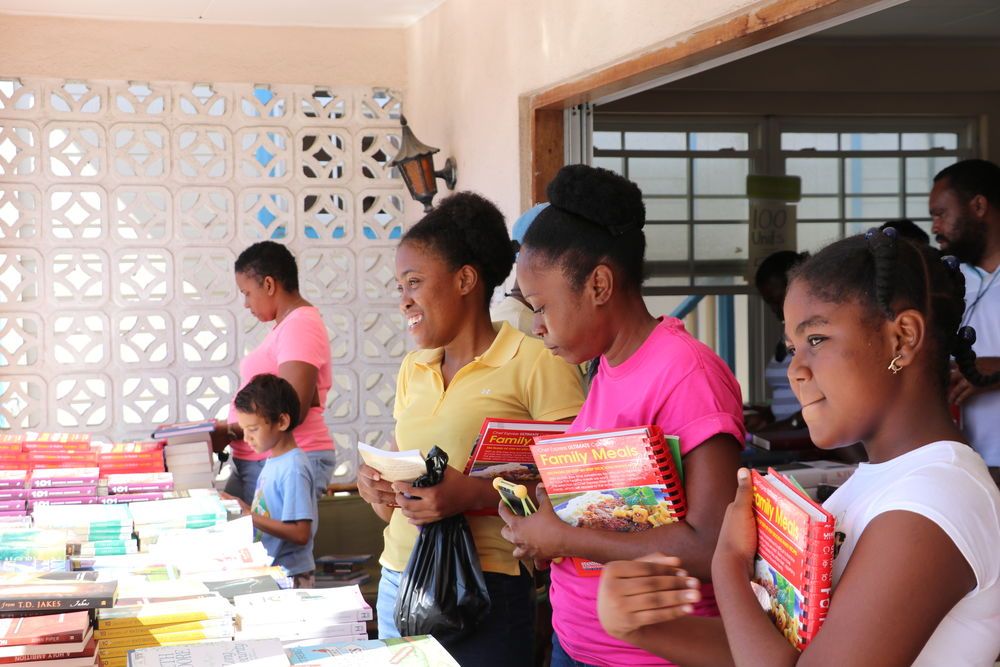 Saint Vincent & the Grenadines: Kingstown, Saint Vincent and the Grenadines :: Customers browse Logos Hopes temporary bookfair on the island of Bequia.
Logos Hope’s bookfair is always on tour, in the sense that the ship is constantly sailing around the world offering discount books to people in each port of call.

But it’s not often that the bookfair staff disembark and set up shop somewhere else. Yet that’s what a team of crewmembers did when they left the main Grenadine island of Saint Vincent and took a ferry to Bequia.

The second largest island has been visited by Logos Hope’s sister ships in the past; and rather than disappoint islanders who may not travel to the mainland, the bookfair came to them for a day. There was no room for passengers in the ship's van when it had been packed full-to-bursting with tables, boxes of books and even a guitar. Ten crewmembers walked the short distance from Logos Hope’s berth in Kingstown to a ferry which landed them on Bequia an hour later.

A guest house on the main street offered a prime location and its upper balcony was made available for the day. In under an hour the crewmembers had carried the van’s contents upstairs, hung banners and signs, arranged the stock and were out connecting with islanders and tourists, inviting them to the ‘bookshop’.

Not all the team members had experience of working in Logos Hope’s bookfair; but the manager David Waugh (Scotland) and some experienced staff were on hand to guide their colleagues and answer customers’ questions. Bequia’s population is around 6,000 people. Roughly the same number of books had been brought to the island, with David having selected a range he expected would be popular; from cookery and children’s books to Christian living titles and Bibles. He was delighted that the first book sold on the day was a Bible.

Logos Hope isn’t only about literature. Once their van was unloaded, some volunteers set off around the seven square-mile island; connecting with schoolchildren playing at a football arena, being invited into homes to pray and visiting the only patient in the hospital.

“There was just one little girl there, being treated for asthma,” said Alena Popova (Russia). “We sang some worship songs and I don’t think she had ever had so many visitors at the same time. It was really sweet that we could just be with her and bless her with our time. She even got a pink balloon puppy, which she loved.”

“I really think it’s worthwhile doing this in the future,” said David. “We met so many people who said they wouldn’t be able to come to the ship. In only a couple of hours we found churches, touched base with pastors who came to see us and reached out to so many people in different ways.

“If it can happen with a small team of ten people, how much more could we do inland in other countries or islands? It’s been really special to bring Logos Hope and the Word of God to the people of Bequia,” he said.

Published: Tuesday, 28 November 2017
Credit: Julie Knox
© 2017 OM International This email address is being protected from spambots. You need JavaScript enabled to view it.

Photos from Saint Vincent & the Grenadines

Kingstown, Saint Vincent and the Grenadines :: Logos Hope opens her bookfair to Vincentians and is commended by the Deputy Prime Minister of the islands.