The needs of the most vulnerable 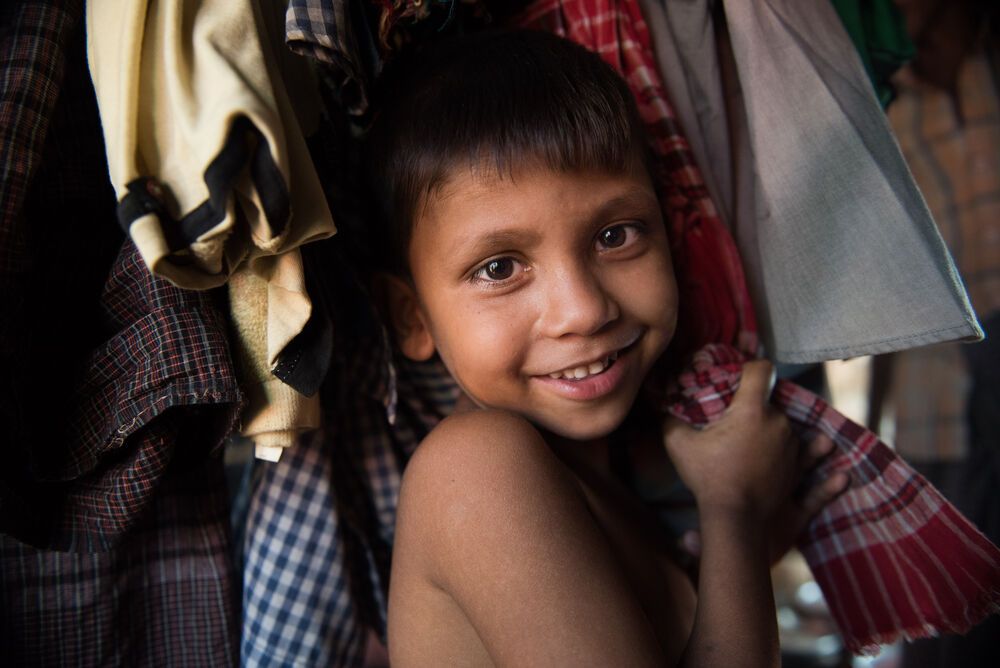 Bangladesh: A Rohingya child in his tent. The refugees are in a camp near Coxs Bazar in Bangladesh. Refugees are fleeing what the United Nations are calling ethnic cleansing in Myanmar.
“Many soldiers came and they burned our houses. I was in front of my house crying. …They kill us; that’s why we flee,” said 11-year-old Rehana, a Rohingya who fled Myanmar on foot with her parents and nine siblings. “I saw them burn many people. Some dead bodies they threw in the sea, and some they threw in our burning houses.” Rehana’s family walked for four days and saw “many young and old dead bodies in the jungle” as they moved towards safety.

The petite girl is just one of many children who are now living in a refugee camp in southern Bangladesh. As of the end of November, more than 625,000 people have crossed the border, and with the pre-existing Rohingya refugee population in Bangladesh, there are now more than 837,600 people in Cox’s Bazar—around 55 percent of whom are children.

One mother, Sabekur, merely 18 years old herself, shared about how she saw her husband killed by soldiers in their village. “I was cooking in the house, and my husband was in the yard with our son. When he saw the military [coming], he left our son and fled. The soldiers caught him and cut him [with a machete]. Then they beat him and shot him on the ground.”

The young widow grabbed her 3-month-old son from the sand where he had been left, and ran. “For three days, I hid in the jungle. I was so afraid. Then I saw many people leaving to cross the border, and I thought, why should I stay?” Sabekur carried her son for five days to get to the border and finally arrived at a refugee camp. “I have no family left. I am alone, and now my son has no father.”

“I know that if you talk to my son, that he will cry,” one father, Jiabur, said. “He saw these things, too.” Jiabur shared extensively about watching from the jungle as soldiers attacked his village, tied up the men in one location and kept the women and children in another. For two days, the soldiers proceeded to plunder the homes, beat people and rape the unmarried women.

“My wife and six children were in that [captured] group, too,” Jiabur said and admitted the helplessness he felt. When the soldiers moved to another village, most of the people in the village fled for safety; Jiabur also brought his family to Bangladesh.

“My [nine-year-old] son keeps asking me, ‘Where is our house?’ ‘Where is our land?’ ‘When will we go home?’ But I have no answer,” Jiabur said. “We want to return home. We don’t want to stay here.”

“I saw dead bodies and the soldiers, but I was not afraid,” said 4-year-old Abdul, simply. Many of the other children’s faces around him are stoic, too. The atrocities they’ve experienced are not visible scars on their tiny bodies. But after the threat of malnutrition, from walking to Bangladesh, and the potential spread of disease among the populated camps, there is also an urgent need to address what is known as child-protection issues. According to official reports, risks include psychosocial distress, separation of children from their caregivers, child-headed households and child carers, gender-based violence including high risk of rape, sexual assault and widespread child marriage, as well as the high risk of child labour and trafficking.

In partnership with other implementing agencies, OM’s on-the-ground partner organisation plans to establish Child Friendly Spaces (CFSs), where staff can help children by providing psychosocial first aid and psychosocial support, and refer those in need for further counselling services.

About 14 percent of the total refugee population has been identified as female single head-of-households, which means there is need for organisations to come alongside them to provide additional support. The CFSs become an opportunity to connect with single mothers through trust built with their children.

OM’s partner plans to establish up to 14 CFSs and train 30 workers to meet these needs of some of the most vulnerable in the refugee camps: the single mothers and children. Too many have horrifying stories from the recent months and need a place where well-equipped and loving workers can remind them that there is hope.

Please partner with us in seeing the lives of these refugees transformed. Please contact your local OM office for more information.

Ellyn Schellenberg grew up as an American overseas in Europe and has continued to pursue her love for travel, writing and photography. She is passionate about using her skills to capture stories of what God is doing in Asia.

Published: Wednesday, 06 December 2017
Credit: Ellyn Schellenberg
© 2017 OM International This email address is being protected from spambots. You need JavaScript enabled to view it.