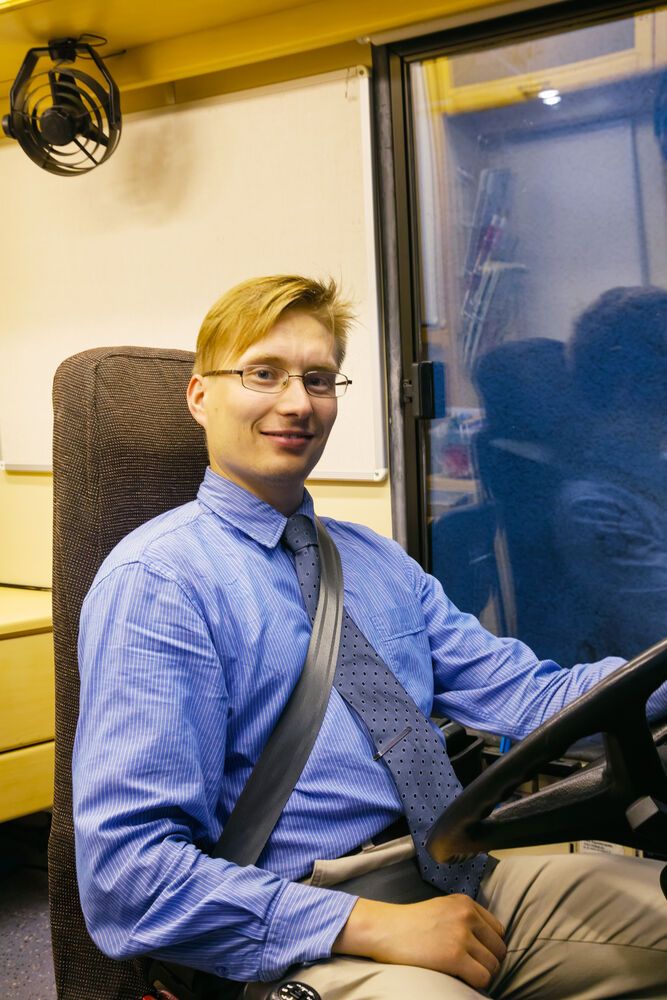 Finland: Esa Tuuri has driven the Bus4Life for four years.
The story begins with a twenty-something-year-old young man standing in front of a notice board. An advertisement had caught his attention. “Wanted: an adventure-loving, open-minded driver.”

OM’s Bus4Life ministry was looking for a new driver to drive its mobile ministry centre. Formerly a library bus, the bus was adapted to take the Good News to towns and small villages in Central and Eastern Europe.

The young man standing in front of the notice board was Esa Tuuri, a university student of energy technology in Lappeenranta, Finland.

“Sounds like me,” he said to the piece of paper. But the timing wasn't right, and Esa needed to focus on his studies. As the years went by, the thought of driving the Bus4Life stayed with him. Esa has now served as the Bus4Life driver since February 2014.

There’s much more to Esa’s job than driving.

“The driver is responsible for all of the technology on board," Esa explains. “The loudspeakers and the projector are put in place, the volunteers are shown where the tables and chairs are stored, and at the end of the day, it’s the driver who makes sure everything is back where it belongs.”

Manoeuvring the bus on the country roads in Eastern Europe requires not only professional driving skills, but also patience.

“These roads were not designed for trucks and trailers, and this bus was not meant for driving on football fields. It’s quite often that we go past flowerbeds and buildings with only a few centimetres between us.”

“In Ukraine, you see a lorry driver fixing his truck every kilometre or so. God has protected us, and we’ve been able to carry on unharmed, despite many difficult circumstances and terrible roads. We’ve only had to tow the bus once when it sunk into a muddy football field.”

It is sunny in Constanţa, Romania, and that’s good news as it means the children’s programme can be held outside in front of the bus.

“Weather plays a significant role in our work," Esa explains. “And God has given us just the right weather many times. Usually it rains on our days off and shines during the outreaches – and the bus gets filled with visitors.”

But sometimes a rainy day is just what is needed.

“One time in Moldova we had to move the children’s programme indoors because it rained so much,” Esa recalls. “I stayed in the bus in case there’d be other visitors.”

That’s when a man in his thirties or forties came inside wanting to know if there were any Bibles.

“We had a long discussion about Biblical history, and the Bible and its writers. The man listened carefully and asked many questions. Such a conversation would not have been possible had the bus been packed with a hundred children coming and going,” said Esa.

Not all have heard

Coming from a predominantly Christian nation, it took Esa by surprise that there are still individuals in Eastern Europe who have never had the opportunity to hear the Gospel. This is especially true for the many men who were raised during Communism and told that there is no god.

But exceptions make the rule.

“One man got curious about Christianity because everyone in the army warned him about religion. He wanted to find out why there was so much talk about a god that didn’t exist, then looked in the right places and became a follower of Jesus,” remembers Esa.

Carried by a vision

Esa has served as the Bus4Life driver for four years, spending the majority of his time behind the wheel, moving from place to place. What keeps a young man from Finland motivated to keep working in such often-changing conditions?

“I enjoy meeting new people and the fact that I get to see how Christians live in various parts of Europe. Over the past years, I’ve gotten to know my colleagues in all six countries that we minister in, and I enjoy working with them.”

“But it’s the eternal value of the work that matters the most,” Esa says. “Our main goal is to tell people the good news of reconciliation through Jesus Christ, and of the eternal life with God.”

After four years on board the Bus4Life, Esa will return home to Finland. Bus4Life is currently looking for a new driver for the year 2018.

Published: Thursday, 04 January 2018
Credit: Karoliina Gröhn
© 2018 OM International This email address is being protected from spambots. You need JavaScript enabled to view it.

Bus4Life ministers in Central and Eastern Europe, bringing hope and Christian literature to the region's widespread towns and villages. During the spring and early summer of 2018, Bus4Life visited Hungary, Moldova,...

An Iranian refugee surprises a long-term worker by stating his desire to become a Christian.

When life quieted down after years involved in sharing Christ's love in Eastern Europe, Risto and Terttu found themselves asking God what was next. The answer came in the form...

Johanna went to TeenStreet for the first time when she was 14 years old, but the experience impacted her beyond the one-week duration of the event.