The faith of a child 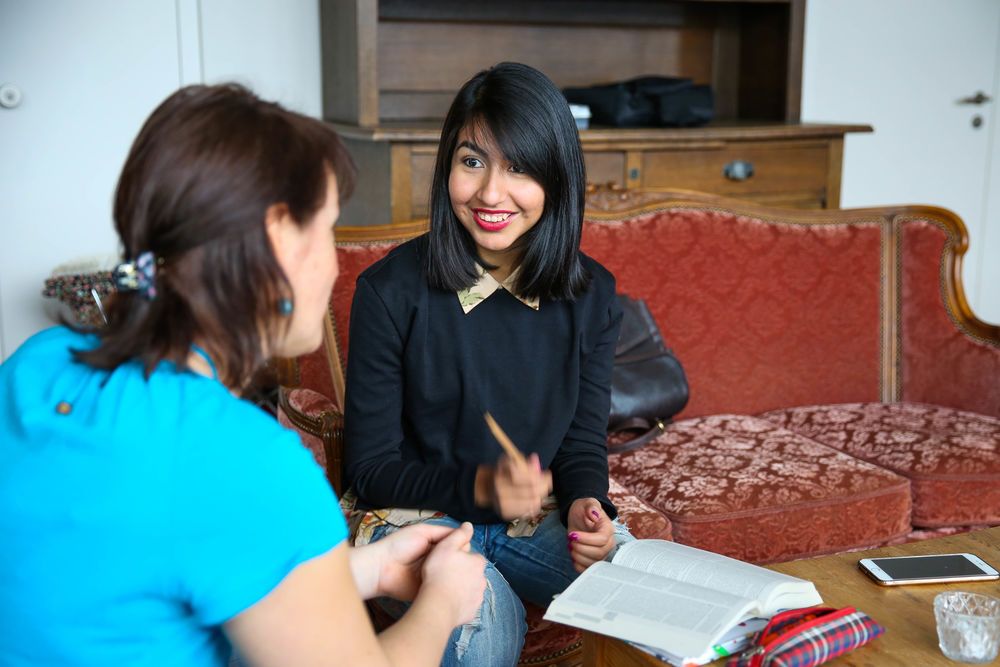 Switzerland: Mentoring is an important part of the discipleship program at Hope for Zurich. Photo by Anja B.
“I would like you to tell the story to the children today, Febe,” said Myriam. But Febe, who came from Argentina and was a trainee at OM’s Mission Discipleship Training in Switzerland, Hope for Zurich, did not really believe that she could do it. “My German is insufficient—they will never understand me,” she explained. Myriam, an OM worker overseeing the programme, did not let this excuse stand: “Every one of the children here was born in other countries, to parents who speak languages other than German. They will understand you just fine!”

Febe grew up as a child of missionaries. Her parents were serving in the north of their own country. She shared that, early in life, she had problems with her self-confidence, so it took quite a while for her to accept herself the way God had made her. Now she understood that God had made her beautiful. Since then, Febe’s heart beat for youth and children. She wanted to pass on the message she received: God made you beautiful!

For years Febe had desired to come to Switzerland—she wanted to serve in that country. Therefore, being accepted by OM was the fulfilment of a dream. Upon arrival, Febe soon realised that the pressure, especially on young people, was very high in Switzerland. One had to perform and show results to be accepted. So her message seemed to be very appropriate for the children and youth in Zurich: “Beauty and money will not bring happiness. Love, joy, peace, patience, kindness, goodness, faithfulness—the fruits of the Spirit mentioned in Galatians 5:22—are the key!”

Still, in the moments before she needed to speak to the group of about 30 children from grades one to six, Febe was afraid. She wondered if she would be able to tell a story—in German—dealing with the theme of the day, ‘Trusting.’ Febe prayed quietly for guidance, while the lively, frolicking group became quiet. Then God reminded her of an event that took place many years earlier.

“I was seven years old and lived in Argentina. My country was in economic crisis at the time, and my family also felt the impact. My shoes were all worn out, but my parents told me that there was no money to replace them. But I needed new shoes; I wanted new shoes. But I didn’t want just any new shoes; I wanted running shoes, and they needed to be pink! I told this to my parents, and they advised me to pray about it,” she told the students.

“I did pray,” she continued. “I prayed very earnestly. The following Sunday our family went on an outing. We were to have a barbecue at a nearby forest. While the food cooked over the coals, we children went to play ‘Hide and Seek.’ I sought out a big tree and hid behind it. As I waited, I noticed something between the roots. It was a box. I bent down and lifted the lid. I could not believe my eyes: a pair of running shoes! Pink running shoes! I lifted them out and tried them on. A perfect fit! God had answered a seven-year-old’s prayer. I never knew where the shoes came from, but I knew that God heard my prayers.”

The children, normally lively and inattentive, were very quiet, touched by the story. They not only understood her presentation, but two seven-year-old girls also approached Febe to speak about prayer. “Does God really hear? Does He even listen to normal, everyday requests?” they wanted to know.

Febe encouraged them to trust in God and have faith that He would answer, just as He had heard and answered her own childhood prayer.

Published: Thursday, 25 January 2018
Credit: OM International
© 2018 OM International This email address is being protected from spambots. You need JavaScript enabled to view it.

A meeting with a woman in a coffee shop leads to open conversations about hurting hearts.

An outreach to Arab tourists in Switzerland opens up doors to talk about Jesus' love.