The joy and pain of church planting, Part 2 (2-part series) 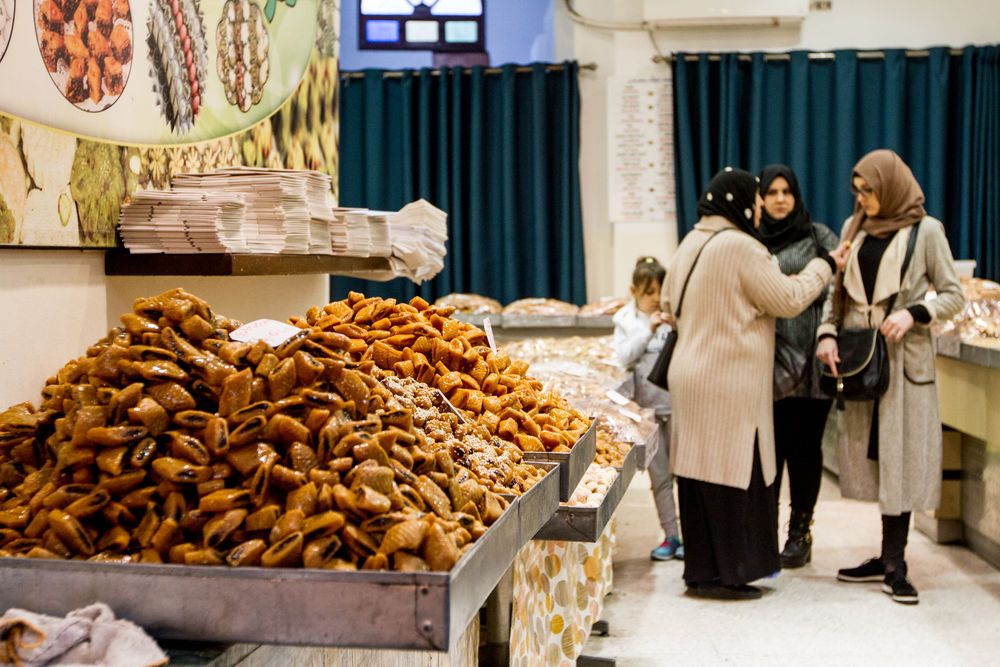 North Africa: Women discuss what to buy inside a sweets shop.
This article is the second part of a series outlining the experiences of Grace* and Julio*, a Latino-American couple serving as church planters in North Africa, as they walked alongside the emerging local church.

Blessed with a growing family and a growing church, especially young single ladies, long-term church planters Grace and Julio focused on recruiting additional team members. “We do better when we are in a team. It encourages us and holds us accountable to spending time with God, making sure He is our strength and focus,” Grace emphasised. Too, she said the couple recognised the difference between their stage of life and that of those coming to faith.

The local young women “want to get married. They struggle with being single. It’s hard to be 25 and still living with your mom and dad,” Grace explained. As a married mother, however, she didn’t have the capacity to meet these women’s relational needs.

Growing the church in their North African city meant “we were spending less time with Muslims and more time with believers,” Grace explained. The new team members they recruited—first one single woman and then another—had time for both.

High on Grace’s priority list as a mom was finding a suitable Arabic tutor for her kids. “I wanted the tutor to be a believer because they spent a lot of time with our kids,” she noted. After the first tutor, a believer, moved on, Grace had difficulty finding a replacement. Finally, someone suggested Maya*, the church leader’s wife.

“Over time, Maya became one of my closest friends,” Grace said. At the same time, Julio met regularly with Maya’s husband and another local leader—“a real mentoring time, helping them through issues that come up in the church,” Grace recounted.

The second half of Grace’s and Julio’s tenure in North Africa brought waves of trial, beginning with the expulsion of their church planting partners from the host country. Arab Spring uprisings tore through the region in 2011, and the church experienced multiple losses.

First, Maya and her husband lost their seven-month-old baby. “That brought us as a church into a new season. That was one of the most painful things that ever happened in ministry,” Grace shared. “We would just continue to talk to them and share truth and truth and truth.”

The husband stood firm in his faith while hurting, but “we were asking everybody to pray for Maya,” said Grace.

“You guys are telling us Jesus heals and He loves us,” Maya would tell Grace. “He didn’t heal my son, it doesn’t feel like He loves me. He doesn’t see me.”

“I was really afraid she was just going to walk away because she didn’t feel any truth in [the faith],” Grace said.

In the end, Maya didn’t walk away, Grace recounted. “She stayed in the church, and in the midst of all this, we had people coming and people going. It felt like there was a core group of people, but a lot of people would come in for a while and then move on. Our responsibility in that was to love and be consistent,” Grace recalled.

“One of the biggest things about church planting is you have got to be consistent,” she stressed. “You’ve got to consistently meet, whether there’s one person or whether there are 10.”

In addition to weekly meetings, Julio and Grace started a mid-week prayer meeting, attended by two to 10 people. “It was a season where the church needed a lot of prayer, and the country needed a lot of prayer. Once every few months, we did an all-night prayer. It was a new thing for locals to come and pray all night…but I think they loved it,” Grace noted. “I think they were feeling like they were doing something.”

“When she found out she had cancer in the bone, in her legs, that was devastating for them as a family” and for the church, Julio remembered. At that time, the doctor had given Najah two weeks to live.

Her husband asked the church to pray, and members, including Julio and Grace, began meeting in their home every day to ask God for healing. “The Lord extended her time for six months,” he said. “People come crying and wanting to talk to her, but she had a big smile, constantly encouraging them and talking to them about Jesus. Because of her testimony, we had the chance to pray for almost everyone in her entire extended family. Because the Lord extended this time, she had the great opportunity to be a witness for Christ.”

On the last day of Najah’s life, Julio and Grace joined the family gathered around her bedside. We read Scriptures with them, Psalm 23, and we encouraged her, and we asked her, ‘Can we pray with you now?’ She said, ‘Yes,’” Julio recounted.

The extended family, who were Muslim, wanted to turn on Qur’anic chanting in the home and asked Najah to recite the Shahada, the basic prayer of Islam. Five times she said no. “A few hours later, she passed away. Especially for me, it was a very hard time,” Julio shared.

“I’ve told people before when they’ve asked me about church planting, I didn’t know that it would be so painful,” Grace admitted. Najah’s death “was a struggle for different believers—everybody had prayed for her to be healed.”

Grace, too, questioned the Lord’s plan. “‘If you had completed the healing in her,’ I asked God, ‘wouldn’t thousands of North Africans have come to know [You] through that?’ I felt like God said to me, ‘They’re not ready…the people, the country, it’s not ready.’”

Najah “was a great testimony for everyone there, and…out of pain, the Lord has been doing His work,” Julio confirmed. “We’ve started to see different groups start in different parts of the country. These leaders are starting to communicate. Their goal is to pray for their country and pray for the church to grow.”

“There’s a sense of God preparing people for something to come,” Grace explained. “If thousands of people came to know the Lord [right now], there would be no net to catch them. Even the church here and that is growing, they’re not ready. God’s working, He’s preparing, He’s building a net 'to catch' the thousands that will come.”

In 2015, Julio took on the OM field leadership role for the North African country where he and his wife serve. Since then, he and Grace have stepped further away from leadership of the church to focus on growing the OM team and increasing church planting efforts to new, least reached areas in the country.

“Our heart from the beginning was that we wanted this group to be very local and locally led. Now we’re to a point of being not involved other than in an encouraging role,” Grace shared.

Published: Wednesday, 11 April 2018
Credit: Nicole James
© 2018 OM International This email address is being protected from spambots. You need JavaScript enabled to view it.