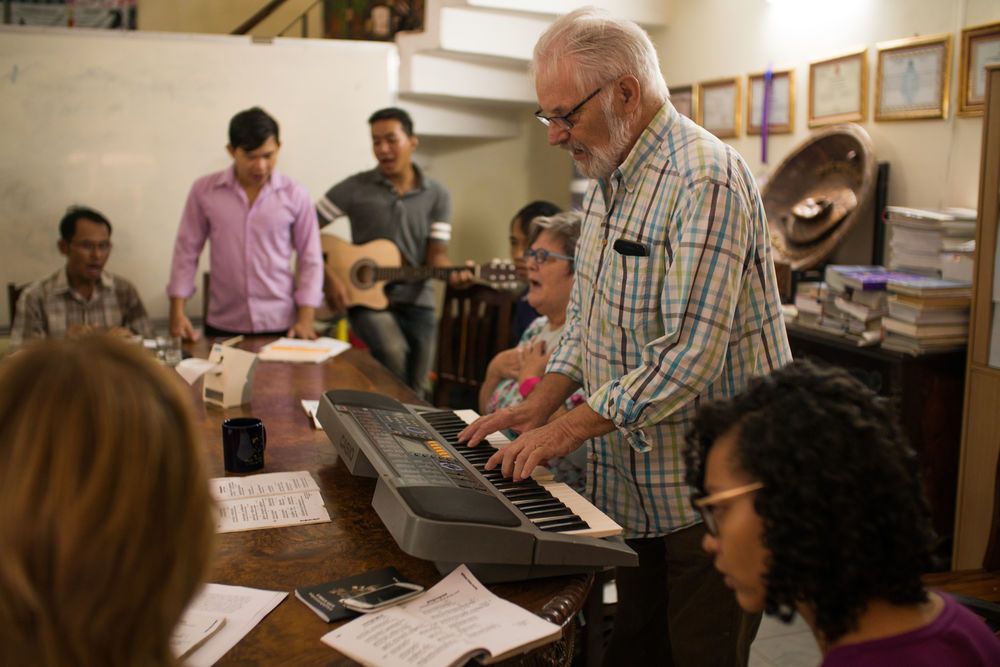 Cambodia: OM disciples Cambodian workers so that they, in turn, can disciple others. Photo by Jay
Having a job in Cambodia is a luxury, having a job you enjoy an even rarer amenity. And in this country—one of the poorest in Asia—meagre job prospects are not the only problems people face. According to “The World Factbook”**, around 2.66 million people survive on less than 1.20 USD per day as of 2012, and 37 per cent of children under five years old experience chronic malnutrition. Lack of education and productive skills continues to affect the entire population, especially in rural areas without basic infrastructure.

Enter OM Mercy Teams International (MTI). With a base in Phnom Penh, Cambodia’s capital, and a kindergarten in Kampong Speu, a province two hours away, OM seeks to provide practical aid and training to poor people in Cambodia and to share Jesus with the predominately Buddhist population. Although Western volunteers lead and disciple the team, Cambodian staff fill critical roles, such as counselling, teaching, training, coaching, developing curriculum, administering the office and maintaining the grounds. They enjoy it, too.

Across the board, Cambodian staff said they worked there because they wanted to. OM not only provides them a place to develop professionally and spiritually, it also gives them an opportunity to pour into their own communities.

“It’s a blessing that we see the people, who were first themselves in our programme, are now able to reach out to their own people,” said Team Leader Johan. 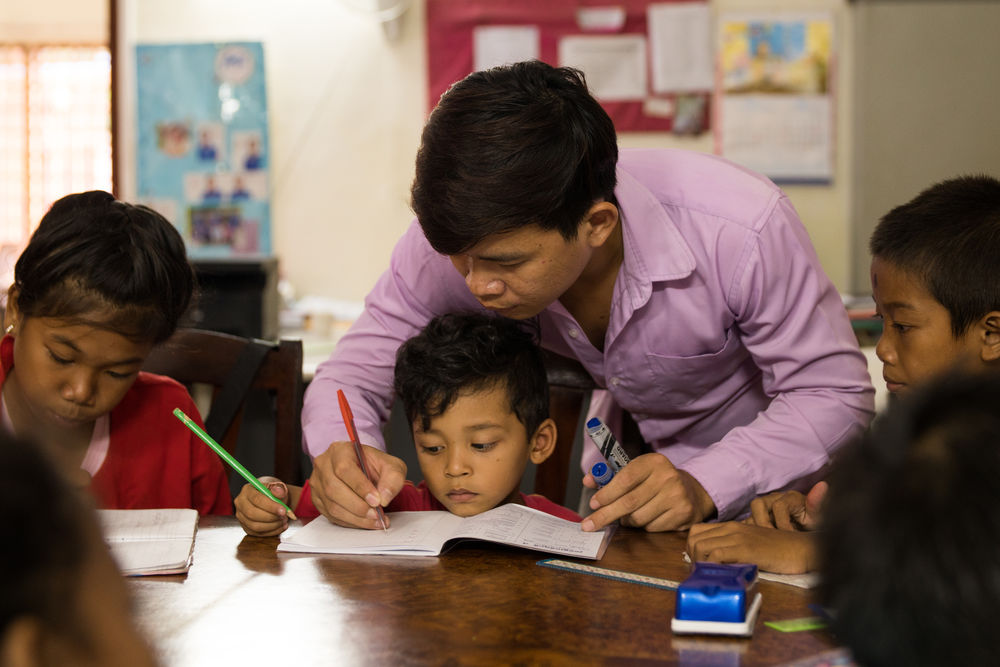 Ork Seyha, one of OM MTI’s newest staff members, first encountered the organisation as a young child. “I came here and listened to MTI staff share the gospel, and they gave me an Operation Christmas Child shoebox gift containing a New Testament,” he recalled. At the time, although he heard about Jesus, he did not believe; his parents worried that the Christian organisation would “curse him” and “put him into the water” [baptism].

After high school, Seyha returned to OM to study computer skills under Chheuy Dara, who developed the IT curriculum. Seyha also took a low-level job as a cleaner and gardener. When he returned at age 20 for English lessons, Seyha discovered a newfound love for study—which led to a promotion at his job—and eventually, he experienced God. “After I tried to know more and pray, then I felt God’s love. When I pray, He always answers me,” Seyha shared. “I think He wants to use me, and He always teaches me new things and gives love to me.”

In early 2017, Seyha began working at OM MTI teaching English and computer skills, as well as coaching football. Nine months in, he loved the job: “I like teaching and I like working in a group, and I like to learn more about God.”

Seyha has seen OM MTI develop and vary its academic offerings, which are important for the community, he affirmed: “In Cambodia, if we do not have knowledge, we cannot develop our country.”

He has also experienced the transforming power of the gospel. “I was born in a Buddhist family. It’s only me [who] believes in Jesus, and sometimes it’s difficult for me. But I try, and I trust in Jesus, and I want to share His love and bring the students [to God].” 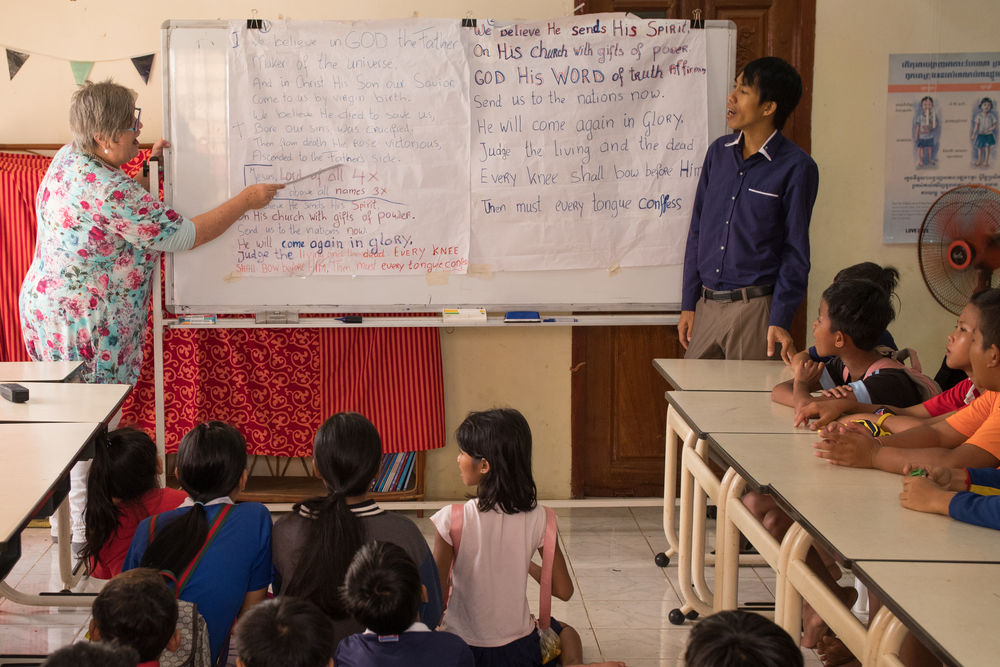 ‘We are always sharing God’s love’

Dara, who has been working at OM MTI since 2011 as a computer teacher and football coach, said, “Everything I have learnt [is] from God. …I need to give back to God. I want to serve God. All the children who come to study here, they are poor like me. They don’t have the opportunity to study English and computer outside of school. When I see them smile, I’m very happy.”

Computers are fairly new to Cambodia, whose technological acumen was wiped out under Khmer Rouge between 1975 and 1979. Dara, who developed—and constantly updates—the computer curriculum for OM MTI said computer literacy was very important to students’ ability to pursue higher education and employment.

In addition to children’s computer classes, Dara also teaches Excel, PowerPoint, Internet, email, research and Photoshop to adults—and computer repairing to a few individuals he selects as assistants. For example, when Seyha showed up several years ago, Dara immediately approached him. “He came here; he was so smart. I wanted to disciple him also,” Dara remembered. “I taught him computer repair … and also Bible verses. After that, he knew more and more and had a heart like me—he wanted to serve the children here.”

That theme extends across all disciplines at OM MTI, he explained. “Any time we start work, we are always sharing God’s love with them. Every time we teach English, Khmer, computers, mathematics, we always show God’s Word to them. They also hear the gospel and believe in the gospel. Many people believe in God [through] MTI.” 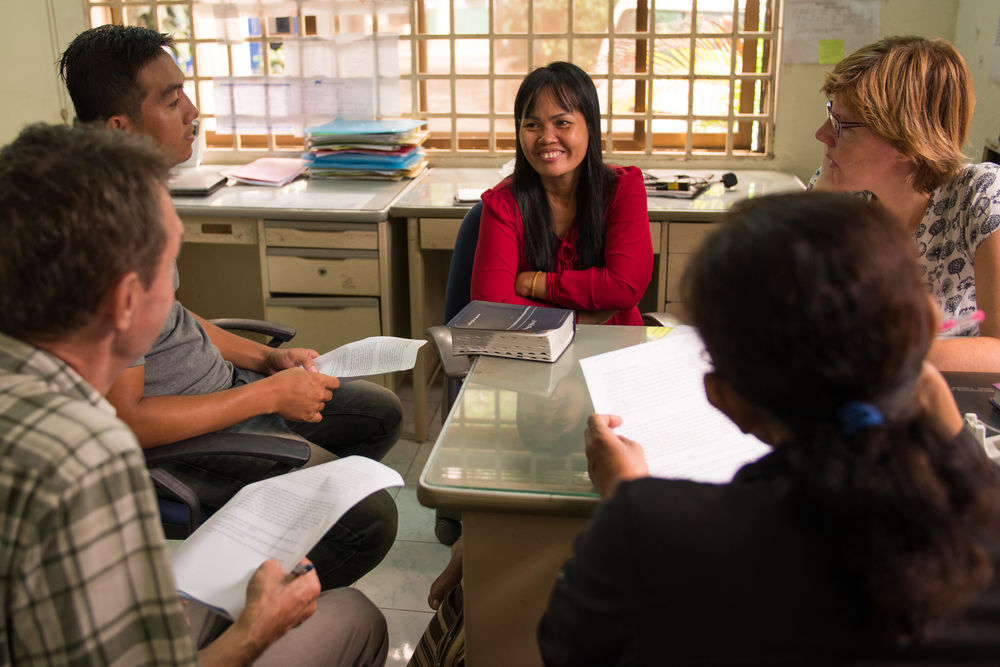 Through daily devotions and prayer, Seyha, Dara and other OM MTI staff continually learn more about God’s Word. “We have every morning a devotion time for an hour with our staff, and we tell about the Bible and about the stories we tell them,” Johan said. “We can see they have not much knowledge from the Bible. Sometimes we have to go back first to tell the story before we can share something about the story with them… . So we see there is a need to have more Bible study.”

Dara also mentioned that the multiple visitors and short-term teams cycling through the office, who share gospel presentations and personal testimonies, have helped him grow spiritually. Another beneficial discipleship tool was the Alpha course, a series of questions exploring the Christian faith. “The Alpha course taught us about God, and the Holy Spirit touched us and [taught us] what we should do to share the gospel,” Dara described.

Johan, too, said Alpha was a successful tool for discipling the staff and others. “When we reach out to the people in the slums, or we ask them to come to our [office], we share about the gospel, we share about how Jesus will help them and how Jesus has died for their sins, that they do not have to be afraid of the spirits like they are here in the Buddhist areas, but that they can trust Jesus and Jesus will take care of them. And so people are thinking about that and changing.”

Even the OM MTI staff, who are Christians, have expressed fear of spirits. “We try to tell them … to not be afraid; they can pray before they sleep,” Johan said. “When we pray together with our staff, we see that prayers are heard. Also the staff see that. They learn to look back and see that God really heard their prayers.”

“Work at MTI is different than other jobs I have experienced before because MTI is really merciful to our staff,” Dara expressed. “We have love; we work like a family.” 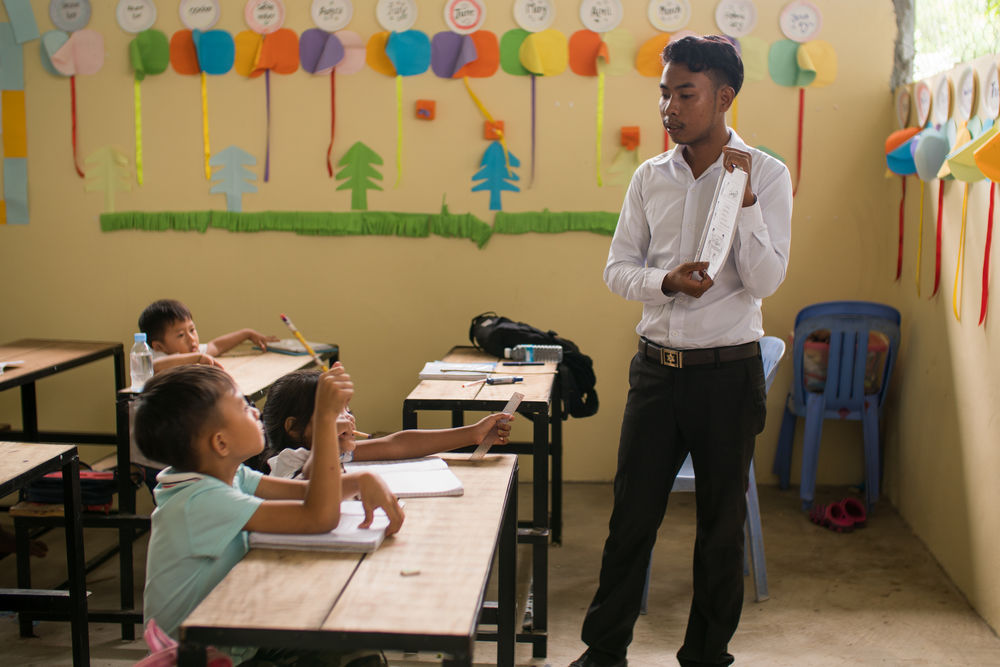 OM MTI’s satellite outreach—a kindergarten in the Kampong Speu province—offers fewer programmes than the base in Phnom Penh but reaches a more remote population. Kosal Phann, who started volunteering as a teacher at the kindergarten in 2017, first attended adult English classes there in 2006.

“This area is Buddhist; they are very active here,” he explained. “When I was a kid [my family] didn’t want me to go to church because they think God is the foreigner’s God.”

In fact, Kosal did encounter some problems when he began studying English classes (the kindergarten also houses a church on Sundays), but his teacher and pastor, “always encouraged me and told me about God,” he said. “I started to fall in love with God.” In 2009, he started to believe that Jesus was the way to salvation.

Kosal, who grew up in Kampong Speu, said he understands the situation of local children. “Families here need to keep their kids to stay home or work. They don’t want their kids to study.”

However, Kosal wants the village children to have the opportunity for a better life. “I want to see all the kids around here get more education. Also, I want to see the kids know God more,” he stated. “We believe the Word of God can change our lives.”

As Cambodians living in a country struggling to rebuild itself after genocide and civil war, OM MTI staff understand the difference the gospel makes. “My country, Cambodia, we would change if we believed in God,” Dara said.

Published: Thursday, 15 March 2018
Credit: Nicole James
© 2018 OM International This email address is being protected from spambots. You need JavaScript enabled to view it.

One young teenager with HIV receives physical help and education from OM while learning about Jesus, his ultimate source of hope.