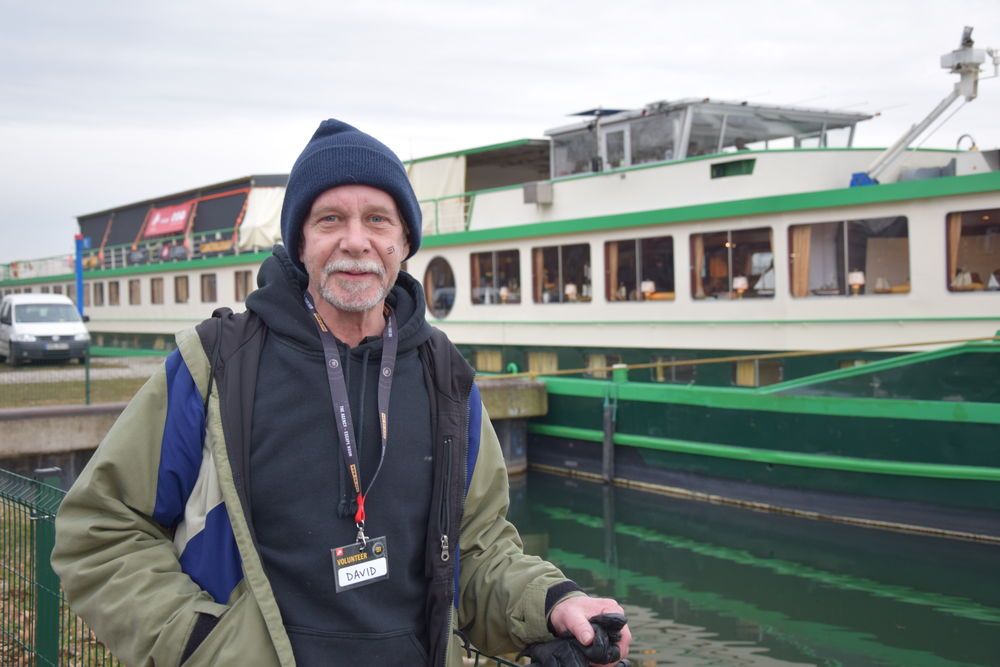 France: While the Riverboat is visiting Strasbourg in France, there are 32 port volunteers from around the world serving on board for two weeks ? an initiative by OM France to open up the opportunity globally for people to experience missions in France. One of these volunteers is David Sisler, from New Jersey. His role on the Riverboat is to act as a homeless man in the onshore segment of The Agency experience. David has a script to guide his acting, but in reality, he is acting out a familiar life that he used to lead.
As OM Riverboat nears the end of its inaugural journey—to three countries and eight ports over three months—it is still bringing exciting new opportunities to both visitors and volunteers.

The Riverboat’s last port of call, Strasbourg, France, includes something no other port has offered its visitors so far: the chance to meet 32 port volunteers from around the world. This large number of volunteers is due to OM France’s initiative in actively encouraging people to come and experience missions in France from anywhere else in the world.

One of these volunteers is David Sisler, from New Jersey, USA. His role on the Riverboat has been to act as a homeless man in the onshore segment of The Agency experience. Although David has a script to guide him, in reality, he is acting out parallel scenes from his former life.

In 2000, David became homeless, following drug and alcohol abuse with unsuccessful rehabilitation attempts, a failed marriage, unemployment and attempted suicide. He was left to live on the streets knowing exactly what it felt like to be left with nothing.

David grew up in a strict Christian home, where he was only shown conditional love. He had an uneventful early childhood until he was five, when his life was thrown into turmoil by witnessing two traumatic accidents. He watched a friend sled into a tree, when a branch pierced the head of his friend, instantly killing him. That same year, he saw another friend run over by a bus as they raced each other to the bus stop. These two incidents caused David immense physical suffering: eczema, panic attacks and nightmares. Although his parents prayed for him, he was unable to shake off his feelings of terror. Eventually, he turned to drugs for immediate guaranteed relief.

By the time he was 18, David had started robbing drug stores to fuel his habit. At 24, he was arrested for interstate drug trafficking. In spite of his rehabilitation at the Word of Life Bible Institute, his drug and alcohol abuse continued to plague him, and he was asked to leave the programme. David ended up at America’s ‘Keswick,’ where he continuously claimed Psalm 51 for his life, as he attempted to put his life in order.

One day in 1984, George Verwer visited the centre to present on OM’s ministry at a Bible conference. George had somehow heard about David and asked to meet with him.

George spent the whole afternoon with David, listening to his story and sharing his own testimony. David was surprised that George struggled with similar issues; he didn’t think that George had also gone through his fair share of highs and lows.

“George didn’t have to do this on top of his busy schedule, but he did,” David recalled. “His kind deed left a lasting memory.”

David continued to seek help from different rehabilitation centres, as he tried to get his life back on track. His last rehabilitation at the Jesus Saves centre in 2016 gave him the inspiration he needed to stay clean in order to serve God, through his counsellor, Ellya Indradjaja.

During a meeting with Ellya, David had complained about the discomfort of sleeping in a bunk bed with so many roommates. Ellya said, “I know how you feel, David. I had the same problem living on a ship.”

“The Doulos,” Ellya answered, showing David her hand with its missing finger, which she had lost when Doulos experienced a terrorist attack.

David’s eyes widened. He remembered hearing George Verwer speak about OM and Doulos 33 years earlier. Memories of that afternoon with George started to flood his mind. “Wow, what are the odds of Ellya being here and being my counsellor?” David thought.

“I think I need to start serving Jesus right away,” David told Ellya.

He and Ellya prayed together, then David went online to look for short-term mission opportunities.  He immediately found the Riverboat’s invitation to join in France, but the application deadline was nearly up. Ellya helped him apply, and, amazingly, doors opened for David to join the Riverboat. The church linked to his rehabilitation centre sent David out and supported him financially as Ellya encouraged David to keep trusting God.

David is excited to see how God will “connect the dots” while serving on board the Riverboat. “God’s timing and ways are so different,” David said. “I’m in anticipation of what the Spirit will bring forth—and how divine encounters will happen to people.” Acting as a homeless man, he sees how people at different stages of their faith are impacted by their encounter with him.

“I think it was God putting the pieces together years and years ago,” David acknowledged. “If I hadn’t met George Verwer 33 years ago, I wouldn’t know what Ellya was talking about when she mentioned Doulos.”

Looking back, David affirmed that Psalm 51 has unfolded in his life. “It didn’t happen immediately, but it happened in God’s perfect timing,” he reflected. “God’s love is relentless and persistent. No matter what we did, He still pursues us with His life.”

In David’s newsletters to his supporters, he always ends with the phrase from Philippians 1:6 (NIV): “He who began a good work in you will carry it on to completion until the day of Christ Jesus.” David is certain that God is going to complete the good work in him—“with or without my permission,” he added.

Published: Thursday, 15 March 2018
Credit: Flora Man
© 2018 OM International This email address is being protected from spambots. You need JavaScript enabled to view it.

Although the escape room was created with a primary focus to mobilise Christians, OM Riverboats and OM France worked together to make adjustments in the simulation to suit non-believers better.