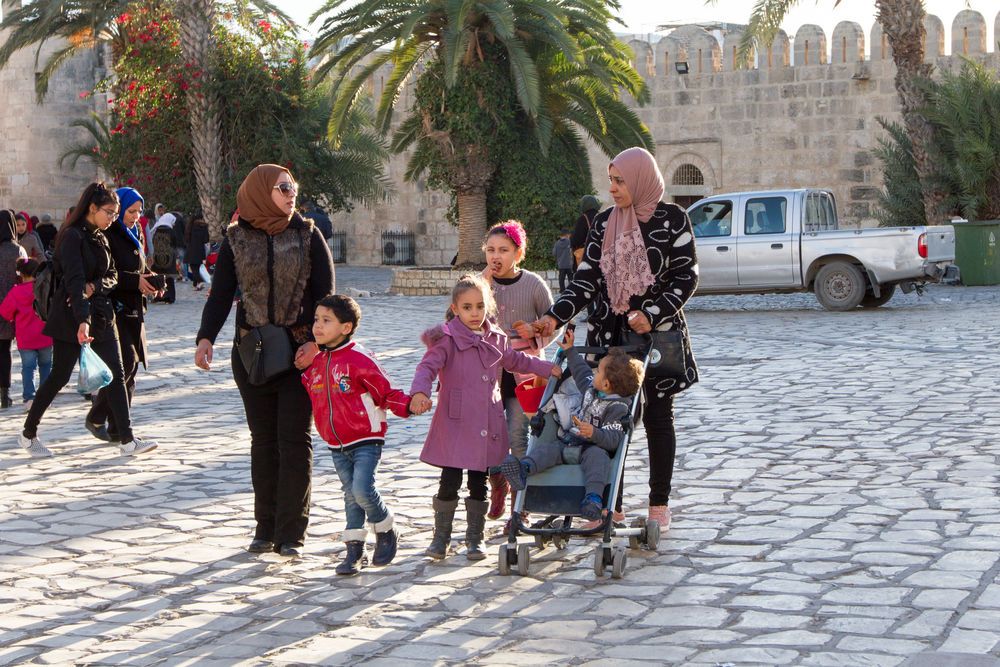 North Africa: There are opportunities to invest quality time in friends and neighbors through everyday life in North Africa.
Knowing she needed to be creative in order to find friends, Diane*,  an OM worker in North Africa, joined a neighbourhood gym. Every day, she spent two and a half hours there, participating in group classes and using the exercise equipment. Still, she wondered how to start friendships with the women she encountered.

Once, she invited the women from her Zumba class—an aerobic dance workout originating in Latin America—to her apartment for a Latino-themed dinner. They came and enjoyed the meal, but the gesture didn’t lead to ongoing appointments.

Occasionally, Diane met one or two ladies for coffee or a meal at a nearby restaurant. But Diane craved something else—a reason to regularly meet with a friend and get to know her North African acquaintances on a deeper level.

After class finished one evening, Anaya*, Dianne’s instructor at the gym, asked her to wait for a minute. “I’m going to walk with you.”

Upon discovering that Anaya also walked home every evening (in the same direction as Diane’s apartment), Diane intentionally began joining Anaya’s last class of the day. Then the two women walked home together. “We started to talk, to go out to coffee shops, but coffee shops are crowded… . You cannot be so deep somehow,” Diane recounted.

Then, one night as they were walking home, the two friends started chatting about movies. They discovered they both liked the Tolkien series,  The Lord of the Rings (LOTR).

“What if we watched the movies together?” Diane suggested. Anaya quickly agreed.

Before their first movie night arrived, Diane accompanied Anaya and a few other friends to a coffee shop. The other North African friends were busy with a baby when Diane and Anaya started talking about religion. “Have you ever read the Bible?” Diane asked.

“No. I was searching for that on the Internet, but I don’t know which one is the right one,” Anaya admitted.

“Oh, there is only one,” Diane responded, sharing a little about God’s Word.

The following weekend, Anaya arrived at Diane’s apartment to watch the first LOTR movie. After they watched the movie and chatted for a while, Diane gave Anaya a present: a wrapped Bible. “She was really happy and excited, and then she left. It was almost 3:00,” Diane remembered.

The next day, the two had planned to attend a wedding together. Diane arrived at Anaya’s house in the afternoon and saw the Bible sitting on her table. “Did you sleep well?” Diane asked.

“No, how could I sleep when you gave me something to read?” Anaya answered.

Diane realised Anaya had stayed up all night reading the New Testament. “Do you have any questions?”

“Yes,” Anaya said, taking the Bible and showing Diane the parts she had highlighted.

From that point on, each evening when the women walked home together from the gym, they talked about the Bible—what Anaya had read and what questions she had. They also continued their movie marathon on the weekends, finishing the LOTR saga, The Hobbit and several other series. Afterwards, they talked until the early hours of the morning. Midnight, 1:00, 2:00, 3:00.

While discussing dreams, Anaya told Diane one of her recurring dreams: She saw a bus full of people, but she was afraid of getting onto the bus. The other dream Anaya talked about was about God’s judgement at the end of time.

“I think these kind of dreams are God protecting you from getting inside this bus because the bus is taking these people to death,” Diane said. But, “when you dream about the end of days, the time is coming when God is going to take His people.”

Diane asked if she could pray for God to reveal Himself to Anaya in her dreams, and Anaya agreed.

“Sometimes I also feel a lot of anxiety and fear, but I pray to Jesus, and I feel peace,” Diane told her friend. “What do you think about Jesus?”

“I think He’s the way, and when He comes back, everyone will follow him,” Anaya said.

The two women continued to meet and discuss the things Anaya was reading. “She said she has talked to Jesus, but she still is struggling with the things that the Qur’an says and she grew up listening to,” Diane said. “For her, [Jesus] is just a prophet.”

Dianne challenged some of Anaya’s beliefs, including her misconception that the Bible had been changed. Anaya was quiet that day, “but somehow it was really good,” Diane said. “I didn’t push her too much after that because I know she’s going to search about these things.”

Unlike her other North African friends, “Anaya is open to listen to what I’m sharing with her," Diane said. "She really wants to know a little bit more.”

Pray that God would reveal himself to Anaya through her dreams. Pray that she will be brave in her journey of seeking truth. Pray for Diane and other workers to have opportunities to share more of God’s Word with Anaya and other North Africans.

Published: Tuesday, 09 October 2018
Credit: Nicole James
© 2018 OM International This email address is being protected from spambots. You need JavaScript enabled to view it.

A 12-year friendship gains spiritual traction when a North African woman buys a devotional book at the local market.