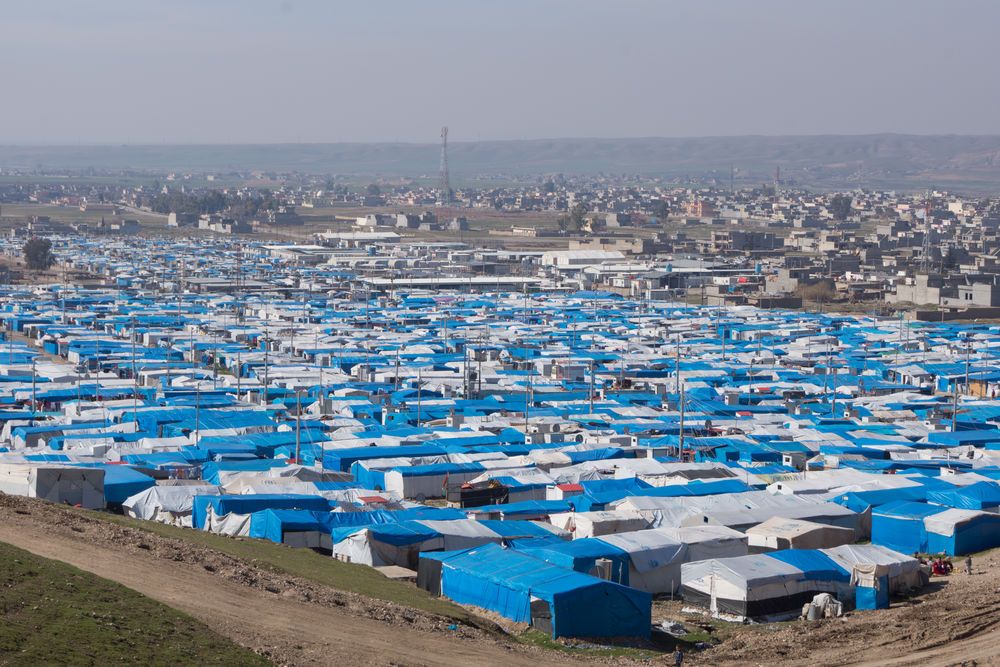 Near East: Temporary camp for refugees and Internally Displaced Peoples (IDPs) fills the valley with white tents and blue tarps. Photo by Andrew W.
“I know a 30-year-old man who, when he held a Bible in his hands for the very first time, cried,” an OM team member named Margaret* said, recounting the emotional encounter of someone hungry to know more of God’s Word in Kurdistan.

“The husband of a young Kurdish couple I know struggled because there was no mention of the Kurds in the Qur'an, but this ethnic group appears in the [biblical] account of those in Jerusalem swept up by the Holy Spirit on the day of Pentecost,” she said. “God used all the languages of the Middle East region among those assembled, including the Medes. Although the Kurds feel they are one of the forgotten peoples of the world, they aren’t forgotten by God.”

In the wake of Kurdistan’s recent failed bid for independence from Iraq, many in the region are feeling great tension and uncertainty about the future. This is most strongly felt in Kirkuk, where the Kurdish loss of the multi-ethnic, oil- rich city to the Iraqi government is more than a crippling blow to Kurdish hopes of independence. The Kurds have lost about 40 per cent of territory they took in the fight against ISIS (Daesh) since the Iraqi army moved in.

After the Iraqi army and Iran-backed Shiite militias took over Kirkuk on 16 October 2017, more than 100,000 Kurdish residents fled the city, including police and security forces, adding to the numbers of already internally displaced people (IDPs) escaping ISIS, along with Syrian refugees sheltering in northern Iraq.

OM's ministry partners reported that 100 people from the Kakai religious minority fled Kirkuk, heavily traumatized by the atrocities they witnessed. The Kakai are a Kurdish Muslim group that reveres the Shiite Imam Ali but (unlike the majority of Muslims) accepts reincarnation. That mix made them a prime target for ISIS, which proclaims a violently puritanical Sunni Muslim line.

OM also desires to minister to Syrian refugees sheltering in Kurdistan. Amidst such desperate circumstances, ministry partners serve the physical and spiritual needs among this community of refugees and IDPs.

“There are families who are interested in learning what’s in the Bible through DBS (Discipleship Bible Study),” Margaret said, and “we would very much like to study with the refugees, but we still lack the needed government permission to open the way for carrying out our project” at the facility.

“Many Syrian refugees are also fearful of the tensions brought on by the independence bid and efforts to quash it as they are already broken by the experience of war in their homeland,” she added.

“Pray for us to persevere in the midst of these challenges: the physical ones, like the lack of gasoline or petrol, as well as the spiritual obstacles before us.

“A Syrian Kurd went into a large refugee camp and told everyone that he wants to become a Christian,” Margaret said, marveling at the man’s boldness.

“If we could get the message out [about Jesus], half of the camp would follow Jesus Christ,” the man told her.

Please pray for the right door for OM to enter communities in Kurdistan and to meet those who hunger and want to hear God’s Word. Pray for the communities in Iraq and Syria impacted by war. Pray, too, that their spiritual hunger would be greater than any fear.

Published: Wednesday, 04 April 2018
Credit: OM International
© 2018 OM International This email address is being protected from spambots. You need JavaScript enabled to view it.