Becoming part of the movement 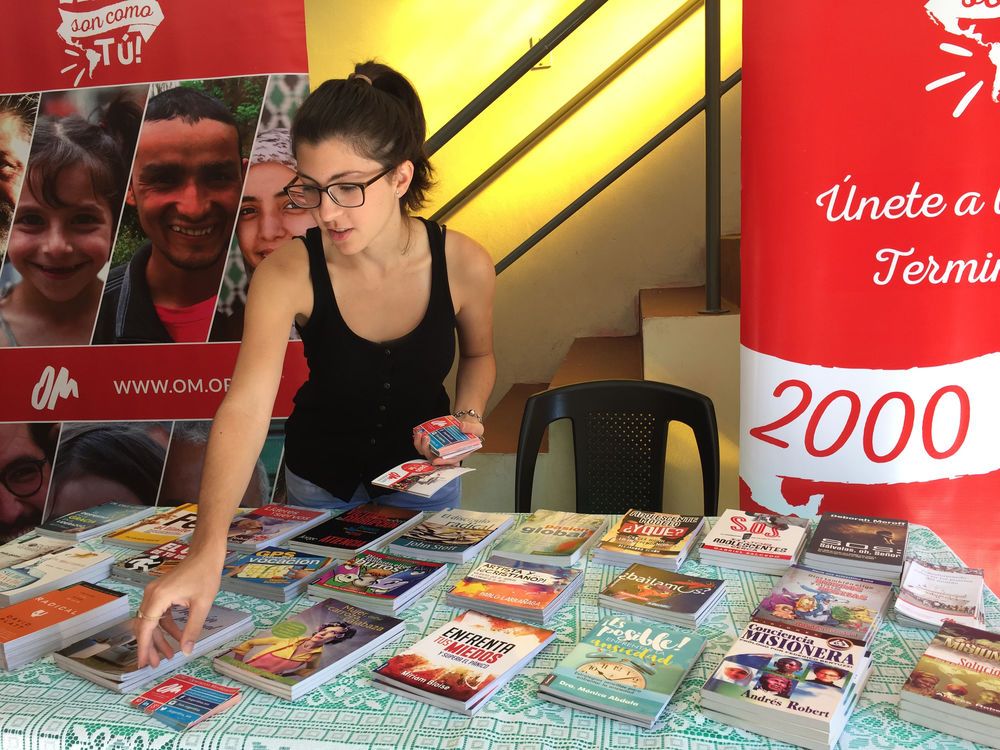 Argentina: An OM volunteer lays out missions books at a church missions conference in Buenos Aires, Argentina. Photo by Nicole James.
When Casey Sbrana (USA) was finishing up his undergraduate degree in business at Azusa Pacific University, he was also perusing OM’s positions around the world. He’d already gone on several short-term trips and spent his senior year of college working in the campus mission department. It’s time for something longer, he recalled hearing God tell him.

A description of football ministry in Argentina jumped off OM’s website. “I always say I have three things I’m really passionate about outside of the Lord: business, soccer [football] and missions,” Casey said. “This seemed like the perfect opportunity to combine a couple of those things.”

He applied to the field and was accepted nearly a year before he planned to go. Five months before his scheduled departure, OM Argentina Field Leader Markus Leder called him on Skype. “I love your passion for football, and you are definitely going to use that here in Argentina, but I feel obliged to tell you that we are shifting our focus to missions and mobilisation,” Markus said.

Recalling that Skype conversation, Markus admitted, “I was scared to call him. Probably he would not be willing to come [anymore].”

Casey, however, “wasn’t really surprised at all, which is weird because I had no intention of working in missions in Argentina,” he said. “At every step of my life, God has always put me in this position of international ministry, even when I’m not planning on it.”

Markus (Germany/Netherlands) and his wife, Vanesa (Argentina), had been planning on mobilisation, though—13 years prior when they were first talking about returning to Argentina with OM. “Our vision for coming here was to mobilise Argentines to go abroad,” Vanesa shared. “It was something we didn’t do for ten years... We actually didn’t do what we came to do.”

They did start a thriving football ministry, plan English classes, work with children in the slums, visit a prison and manage the team in Buenos Aires. “Because we had so many things going on locally, we didn’t have time to do church mobilisation. We had six days of ministry locally. The seventh day we needed a rest,” Markus described. About four times a year, the team squeezed in a token visit to an Argentine church.

When Markus became field leader in 2015, Latin America’s OM leadership asked all fields to go through the code of good practices. Markus contracted an OM coach outside Argentina to help guide his team through the process.

First, the coach asked, “What ministries do you do?” The 20 field members at the time listed 25 activities. Then the coach presented the second question: “Close your eyes for a moment. If you were to say what OM Argentina is about, what would it be?” At the same time, everyone answered, “OM Argentina is about mobilising the church.”

In theory, but not in practice. “Not one of the activities that we listed was even closely related to church mobilisation,” Markus said. “That’s when the team noticed there was a big difference between what we think we do and what we actually do.”

That was the beginning of Argentina’s alignment process—praying about which ministries God had actually called them to do, and which ministries they had started simply because there was a need. In 2017, when OM unveiled its new mission and Latin America announced its intention to become a sending area, focusing on 13 strategic least- reached areas, OM Argentina underwent the second phase of alignment: letting go of local ministries.

For Markus, the most painful part of the process was handing over the football ministry he’d started and invested in for eight years to the local church. At first the local pastor was shocked by the suggestion that the church take over, but as Markus explained how the church had Argentines—fluent native Spanish speakers—who were skilled and better equipped to direct the programme than the short-term international volunteers who had headed up the ministry to that point, the pastor quickly agreed. “It’s going fine without me,” Markus shared several months after the transition.

Some ministries ended naturally; other ministries were passed on to different organisations with capacity to build the ministries beyond what OM’s limited finances and personnel could accomplish. “We finally feel we have permission to let go of these ministries and focus on different things,” Markus shared. “God prepared the way, and step by step, He opened our eyes to new realities.”

The OM team in Argentina had also shrunk, due to finished commitments and personal obligations. So when Markus needed to tell new team members—Casey, Tim and Naemi—that the jobs they had signed up for were no longer available as full-time OM ministries, he was worried they would walk away.

While Casey had planned to play football, Timothy Tai (UK/Malaysia) and Naemi Siemens (Germany), scheduled to arrive in Argentina at the same time, both wanted to work with children. During their first team meeting together on the field, Markus shared the new vision for OM Latin America.

“At first, I have to say I was a little disappointed or confused because I love to prepare myself for things that are going to happen,” Naemi said. She had to rethink her plans, “but with the time, with talking about the importance of mobilisation and Argentines, with their culture and [how] they’re perfect to go be missionaries, I got to love that idea.”

Tim, too, quickly warmed up to the task of mobilising Latinos for missions. “Our very first weekend here we were invited to a church. They were having a missions Sunday, and we didn’t know what to expect, but we just went there and started helping out with whatever we could,” he recounted.

The church had decorated one room to look like China, filing different groups of youth in at different times to listen to volunteers talk about missions in China. Tim, born in Malaysia, jumped in, teaching the teens how to use chopsticks and playing games with them. “It was a really cool first experience visiting another church and helping them in their vision to [get] their people excited about missions,” he said.

Because Latin America had been receiving missionaries for hundreds of years, Latino Christians rarely received the message that they, too, could go to the least reached. In Argentina, new workers joining OM need to commit to reversing that mind-set. “We are really here to serve as an example of stepping out of our comfort zone, where we’re from, what we’ve been doing our whole lives,” Casey explained. “We’ve stepped out of that into something that’s unknown and uncomfortable, and ... they can do the exact same thing.”

“It’s not easy for anyone to pack up their bags, leave their families, leave their homes, leave all the comforts of home, leave their friends and everything they know just to go somewhere foreign, so the fact that Casey, Naemi and I are here, and obviously we had to do that, it’s showing them that we’re not just telling them to go, but we’re actually modelling it as well with our lives,” Tim added.

Just as missionaries do not need to come from certain countries, neither do they need a particular skill set. Some of the workshops the OM team developed included information about sports evangelism and social media—everyday tools Christians can use to share the gospel at home or overseas.

“We just need an experience of God that we can tell others about. We are all his witnesses,” Tim emphasised.

At a mobilisation visit to a small church, the OM team handed out response cards after their presentation, encouraging audience members to fill out contact details if they wanted more information about short-, medium- or long-term missions.

“What’s this about?” one 11-year-old boy asked Naemi. After she explained the card to him, he thought for a second and then checked the box for long-term missions.

“Whoa, that’s super cool,” Naemi remembered thinking. “That’s how we should react. That’s our task and our responsibility in this world—that we go and spread the gospel.”

Responses like that are indicative of a larger movement, Casey shared. “I think that God is doing something big in Latin America,” he said. “I think it’s their time to step up and go. ... I don’t think it’s a coincidence that it’s shifted from local ministry to mobilisation; I think it’s a strategic time. ...God uses people. That’s why we need to be here to be part of that movement.

On a Saturday afternoon in March 2018, Pastor David Lencina sat with a group of 17 people, mostly youth, attending OM’s mission presentation at his church, Iglesia Bautista Misión Vida in Buenos Aires. He’d hoped for up to 40 from his congregation to attend, but the late summer weather and other conferences across the city had deterred many people. Still, “the fact that [OM] is here saying something is already good, and that they’re sharing their passion about evangelism—it might be contagious,” he said.

Maria Isabel Oliva, who started leading the church’s youth group in September 2017, had organised OM’s participation that day. She knew OM from a short-term trip she’d participated in as a youth and wanted to introduce another generation of Christians to missions. After listening to the workshops and presentations on the least reached, Maria recognised the appeal of the social media evangelistic tools the team had presented. “This is what the youth use these days. They’re always [on] the phone,” she said.

Though she was used to other methods of spreading the gospel, Maria didn’t mind that technology had trumped tradition. “The most important thing is that the Word of God spreads, and more people go to those who haven’t heard. These tools are good for that,” she said. “OM is very important for young people to go out to other countries. Without this support, they probably wouldn’t do it.”

Julian, 16, had received an invitation to the missions presentation over the messaging application WhatsApp. He’d been interested in a photo advertising sports evangelism (Casey’s first workshop) and had enjoyed the entire day’s presentations. The information about praying for and giving to missions was review, he said, “but I haven’t heard about where to go, how to go, the 10/40 window—that was new.”

Through April 2018, the OM team in Buenos Aires was booked every weekend to visit churches, with more invitations lined up for the rest of the year. “We are sensing that God is doing something in Argentina,” Vanesa shared. “The churches are open—it’s something different that didn’t happen before. There is more interest in missions and more people willing to commit.

Markus agreed: “I really feel that God has prepared Argentina and OM Latin America with this vision for mobilisation.”

Published: Thursday, 19 April 2018
Credit: Nicole James
© 2018 OM International This email address is being protected from spambots. You need JavaScript enabled to view it.