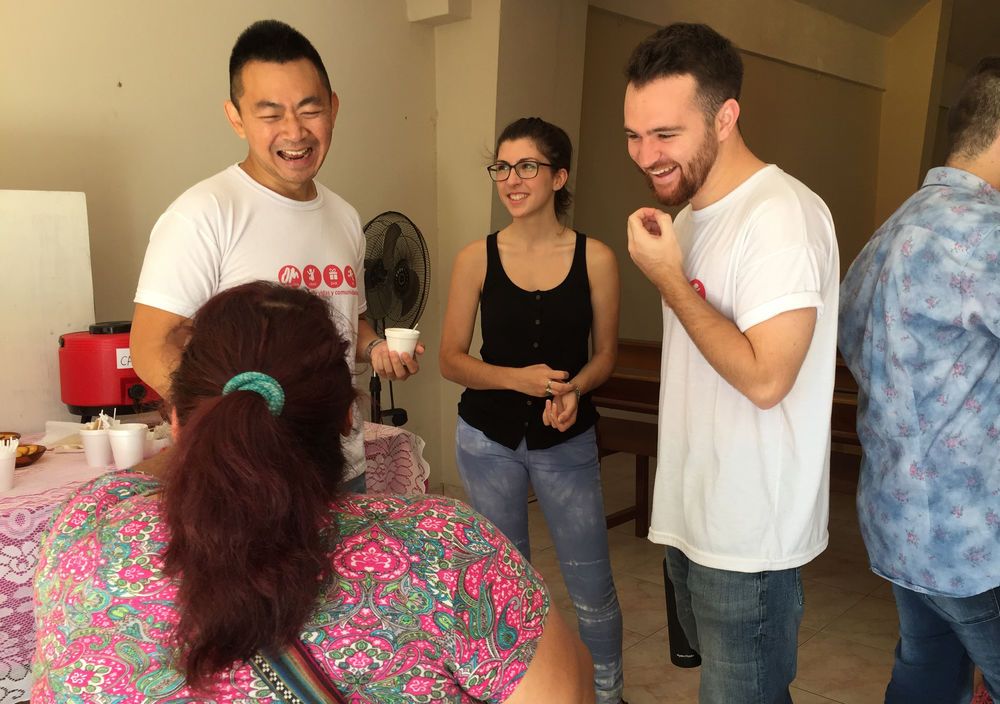 Argentina: OMers talk to church members during a break at a missions conference.
A crippling fear of elevators, an appallingly bad romantic relationship and a snapshot from the 2006 World Cup—you’ve never heard ‘Pray, Give, Go’ like this before. When OM workers Naemi Siemens (Germany), 18, Casey Sbrana (USA), 24, and Timothy Tai (UK/Malaysia), 38, set off on a 7,000 km, five-week mobilisation tour across Argentina, they used personal testimonies and unique analogies to help churches and youth groups understand the importance of global missions.

The mobilisation tour, 11 Jan. - 16 Feb. 2018, was both a prototype and an answered prayer, according to OM Argentina Field Leader Markus Leder. “We knew we wanted to do traveling teams and mobilisation, but we never did,” he admitted. Fifteen years after he and his wife, Vanesa, moved to a suburb of Buenos Aires, Argentina’s capital, with three new team members arriving and the annual summer holiday looming—traditionally the most difficult period for Markus to fill ministry-wise—“it was the right time to do it.”

Freshly enrolled in Spanish classes, the trio of new OMers filmed a simple video advertising their missions-themed workshops, and Vanesa, an Argentine national, posted it on OM’s social media channels. Over 20 churches responded, inviting the team to visit various summer camps and youth retreats. “According to the dates of the camps, I tried to make a map connecting the dots,” Vanesa recalled. The road trip was on.

As preparation for the trip, still a few months out at the time, the team divvied up topics, assembled costumes for the ‘hat presentation’—an interactive demonstration of the ratio of missionaries serving among least-reached people groups—and tested their programme at a handful of camps October through December.

The team developed individual, hour-long workshops corresponding with ‘Pray, Give, Go,’ long considered OM’s informal tagline. Naemi chose to focus on prayer because of its newfound importance in her life. “I was never a prayer person, and spending time with God was usually something I had to check off,” she shared. “But here [in Argentina], because I didn’t have my daily routine like in Germany, I found the fun of it and the joy of spending time with God.”

Casey, who presented on going, told audiences about his first experience on a short-term missions trip to Africa (his mom made him go) and meeting a new friend there who had never heard about Jesus. He also introduced the ‘commitment cards’—business card-sized hand-outs the audience could keep. “We believe there’s power in making that commitment to the Lord, writing it down and making it tangible,” he said. In fact, a similar pledge card in college catapulted him into his own two years of service in Argentina.

Tim, by default, opted to talk about giving, though his background in banking provided a natural link to finances. His presentation, however, focused more on giving one’s life for God than simply writing a check (or standing in line for hours at the ATM to withdraw a donation, as the case may be in Argentina).

All three foundational workshops, flavoured with intimate personal stories and individual cultural details, as well as other parts of the presentation had one goal: “to share with them what OM is doing and why we think missions is important,” Casey said.

When the three OMers and one translator, who switched halfway through, finally piled into their car and took off, they’d prepared their materials, but they still didn’t know what to expect.

“It was basically different at every camp and church,” Naemi summarised. Sometimes the team were the main speakers for a three-day camp—as well as the worship band and the game leaders and the schedulers—and sometimes they only had a few hours to present.

“I love to prepare myself for things that are going to happen, but that’s a little bit difficult in Argentina because before we got to a camp or a church, we didn’t know how many people are going to be there, what age do the people have, are those teenagers, youth or maybe older people, and how much time do we have for a program,” she explained. “So that was a thing that I really had to learn, to just stay calm and to trust everything will work out fine.”

For the most part, it did.

“We had amazing times—going on detour to Bariloche, seeing a beautiful part of Argentina we weren’t expecting to see, getting to know each other better as a team—it was a great road trip,” Tim described.

“We didn’t have challenges between us in the team. That’s where everything went super well,” Naemi added, “and even on the trips, we’ve never run out of gas. We got lost sometimes...”

And a few things also got lost in translation. “Whether we were explaining what would happen next or talking about a specific verse and how it relates to our mission—it didn’t happen a lot because we had great translators—there were a couple times when something was explained [incorrectly], and it shifted the original intent of what we wanted to get across,” Casey explained.

The team, who all rely on internet rather than cellular data for everyday messaging and GPS, spent a fair amount of time at roadside rest stops, mapping out their next moves over free WiFi. At times, planning, scheduling and communicating with camp organisers could be frustrating, Tim said: “Not all the camps would have a clear schedule. Even if they did have a clear schedule, they wouldn’t always follow it exactly. Everything was always flexible.”

At one church, the team had been asked to present their workshops, ending in the afternoon or evening. By 19:00, they’d finished their ‘Pray, Give, Go’ workshops, the ‘hat presentation’ and another prepared skit. “We’d done everything we wanted to do, and then they come up to us that evening and they say, ‘Actually, we want to end tonight about 22:00,’” Tim recalled. “We had to think of more things we could do just to fill up the time. I ended up sharing a message about guarding your heart that has nothing to do with missions.”

On the mobilisation tour, the team slept everywhere from air-conditioned camp cabins to makeshift chair beds in the middle of an empty event hall. At one family’s farm in the countryside, they milked a cow and star-gazed for hours in the pasture.

When they only needed to give one workshop a day, the team spent time with the teenagers and youth, building connections and friendships. Casey played pick-up football whenever he could. “I’ve probably doubled my Facebook friends over the last four weeks,” he said, laughing.

The last night at their final camp visit, around a campfire, the OMers washed the feet of all the teenagers there. “While I was washing their feet, I really felt like God loves us so much and He gave everything for us, and He came to this world to serve us. That was a really, really beautiful experience,” Naemi shared.

“It was a lot of traveling. A lot of going to different places” and creating ways to stay in contact with people and offer them opportunities as they grow in their understanding of missions and their walks with the Lord, Casey said. “We lived out of a car, and it was awesome.”

“It was always encouraging when we gave our three workshops about ‘Pray, Give, Go’ and then people came to us, trying to get more information about missions, about how to pray, how to give, how to go, about short-term mission trips,” Naemi said. “Sometimes people were saying, ‘Wow, we didn’t know these things before; we want to get involved.’ That was our goal. People wanted to get involved into missions.”

At one camp, the team handed out information cards and the commitment cards at the same time, “probably a logistical error on our parts,” Casey noted. Later, when they were looking through the information cards they had collected, they found someone’s personal commitment card. The card didn’t have a name, but it showed the person had committed to serving—someday—in long-term missions.

“It was encouraging to see that through our programme, through the process we’ve been working on and praying about a lot, God was working. God was putting it on people’s hearts to serve long-term in countries other than Argentina,” Casey said.

Nearly a month after the team returned from the road trip, Markus said he was still receiving requests for them to visit new churches. The team collected contace details from around 300 individuals interested in receiving information about short-, medium-, or long-term missions. “One of our objectives was not to go and talk and leave, but to go and share and keep that conversation going and build this database of people we’ve been in contact with and have been able to share something about missions with,” Casey said.

OM also connected with 40 new churches as a result of the mobilisation tour. “Most of them never had experience with missionaries before,” Vanesa said. “Here in Buenos Aires, we’ve been to so many churches, but we’re just one of many organisations.” Outside of the capital, however, OM’s missions presentation “was a big eye opener for many [churches]. Most of them are inviting us back.”

Logistically, the trip worked well because of the team, Markus and Vanesa acknowledged. Churches and camps hosting the team provided food and housing, and they often gave love offerings, which covered fuel and toll fees. The team took petty cash for upfront expenses, but rather than needing to raise a separate mobilisation budget, they returned from the tour with extra funds for OM’s ministry.

Some Argentines who listened to the team’s presentation have already applied for short-term trips, Vanesa reported. For others, “the next step is for them to learn more,” Tim said. “These are all the building blocks ... that will help us achieve our goal of sending 100 missionaries over the next ten years.”

Published: Thursday, 10 May 2018
Credit: Nicole James
© 2018 OM International This email address is being protected from spambots. You need JavaScript enabled to view it.