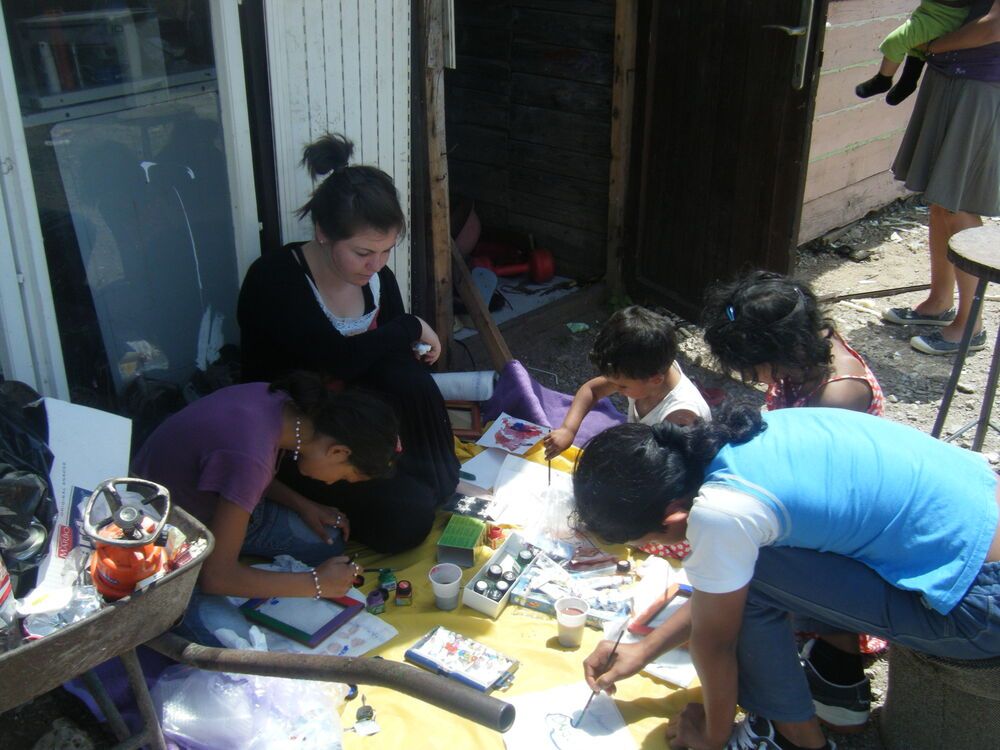 Montenegro: Outside a Roma familys small home,in process of renovation by OM Montenegro and Transit Challenge Team
Robbie and Angela, serving with OM Montenegro, live in Bar’s Old Town district, historically an area of poverty and deprivation. OM’s Lighthouse community centre, which they run, is very popular with local kids and youth as a place to hang out and for the activities they participate in there. The greatest blessings in the recent arts and crafts sessions have come when events took an unexpected turn.

A successful day of showing love

International Women’s Day on 8 March is a huge celebration in the Balkans. Robbie and Angela had planned special craft activities for that day: The kids would make cards for their mothers or grandmas, and the couple had also ordered 40 roses for the kids to give their relatives. After all the preparations were made, Angela found she had to go to Serbia for the first two weeks of March for language study.

“My expertise is not in crafts but, the light must shine,” Robbie laughed, remembering the thought of running the festivities himself. Angela had prepared the supplies, so Robbie just needed to facilitate the project.

“I think it actually went pretty well,” he said. “There were some masterpieces created, some [kids] used enough stickers for 10 cards, and there was glitter everywhere. But most importantly, the kids were so happy to have something special for their mother or grandma. I think it was a successful day of showing love.”

On another occasion, things didn’t go quite to plan. Angela had been very excited that more girls are now coming to Lighthouse, since in the local culture they are not given much freedom to be outside their homes. So she thought it would be great to have a craft time with just the girls. In her mind, Angela pictured the five or six girls who would come sitting around the table—how they would laugh and talk as they made their necklaces and bracelets. But God had a different plan because the boys also wanted to make the jewellery.

“At first, I told them it was just for the girls,” Angela said, “but when I saw their sad little faces, I just had to let them.” So she changed the plan. Thankfully, Angela had bought enough supplies for everyone.

It wasn’t the way she had imagined it would go, but watching them all, girls and boys working so carefully on their jewellery, was better than anything she could have planned. But the greatest surprise was when one of the boys, Edin*, who can cause trouble at times, asked if he could make some jewellery for his mother.

“He sat so quietly, carefully making his jewellery—I was astonished,” Angela recalled. When he had finished, Edin carefully made a little box out of a small piece of paper to put the jewellery in, just like a shop-bought present.

When he came into Lighthouse the next day, Edin quickly ran to Angela, gave her a huge smile and high five and told her how much his mum loved the necklace and bracelet. “I don’t know what Edin’s family life is like,” Angela said, “ but I am so thankful that God changed my plans and brought such joy to this boy!”

Angela and Robbie hope to meet Edin’s wider family soon—please pray for further opportunities to bless them and other families like them with the love of Jesus Christ.

Published: Wednesday, 06 June 2018
Credit: Nicky Andrews
© 2018 OM International This email address is being protected from spambots. You need JavaScript enabled to view it.