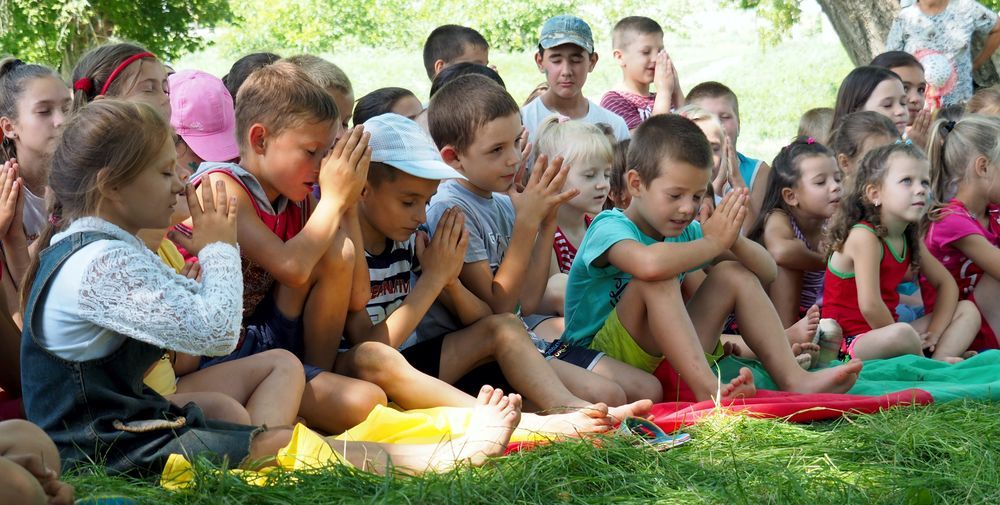 Moldova: Children praying at the end of a programme led by a ?River Adventure? outreach team in Z?luceni, a village with no evangelical church or known believers. The annual visits to this village have produced great openness, not only among the children but also their parents (many of whom attend the programmes) and the mayor. The ?River Adventure? is a short-term outreach by OM Moldova, which visits unreached areas along the river Nistru in northern Moldova every summer.
“It’s them; it’s them!” a girl walking on the road with her grandmother shouted excitedly, as the white van passed them, driving towards the river, beyond the village of Zăluceni—an out-of-the-way village in northern Moldova, where nothing much happens and where (as in the whole surrounding region) there are no evangelical churches or believers. Yet OM outreach teams continue to visit each summer.

The van that had caused the girl’s excitement was carrying the kitchen and camp supplies for OM Moldova’s ‘River outreach’ team, accompanied by a few OM workers. The rest of the team arrived by raft on the water a bit later that evening. The next morning, when they came to the field where they were going to lead a children’s programme, they saw that they had been eagerly awaited. A crowd of people was already gathered; not only children, but also many parents, grandparents, youth and other curious villagers.

“Ever since hearing of your arrival yesterday evening, my granddaughter has been so excited, she couldn’t wait for morning to come!” one lady said.

Another commented: “My girl didn’t want to eat breakfast; she didn’t want to lose any time coming to the field; she was so afraid of missing something.”

Though OM Moldova are blessed with a ready welcome in many places throughout Moldova, it is still tangibly stronger in these small villages along the river. Teams report that it is a truly humbling and amazing experience to witness the joy and excitement of the children, the gratitude of the parents, the openness of most local authorities—and the general thirst for God.

“We are waiting for this all year,” another woman explained on that green field in Zăluceni. “There is really nothing for the children here, and nobody comes to offer them anything like what you do.”

But the excitement about games, bouncy castle or face-painting are obviously not the only things the children are taking away from the annual programmes: These children remembered Bible verses and songs from previous years and responded to questions with a surprising understanding of gospel truths, truths that other teams had taught them in earlier years, that had obviously taken root in their hearts.

The children of Zăluceni listened and watched with wide eyes and open mouths as the team talked about the crucifixion, and afterwards used an illustration where water was turned brown and then made clear again, to explain how Jesus’ death can cleanse our sin.

While all this was going on, a team member overheard the conversation of two onlooking ladies. They were obviously paying close attention, and one seemed ready to believe the truth of it all, while the other was sceptical: “How can that be possible—dying and coming to life again? Being freed from sin? We are not able to be holy, we’re too sinful!” she commented.

“Listen, they are telling you how it’s possible: through Jesus!” the first one replied, but the other still tried to discourage her, insisting there is no way we can be clean. Right then the illustration was coming to its close and as the dirty water turned back into a clear colour, all the children gasped in amazement, but for that lady it was the last bit of confirmation she had needed: “It is true,” she exclaimed with conviction, “we can be cleansed!”

OM Moldova increasingly focus their ministry on the least reached areas of the country and seek to establish more local ministry teams—small teams of local and international workers, who live within an unreached local community for several years and help plant churches in these regions.

Published: Wednesday, 10 April 2019
Credit: Esther Hippel
© 2019 OM International This email address is being protected from spambots. You need JavaScript enabled to view it.