The only Christian in her village 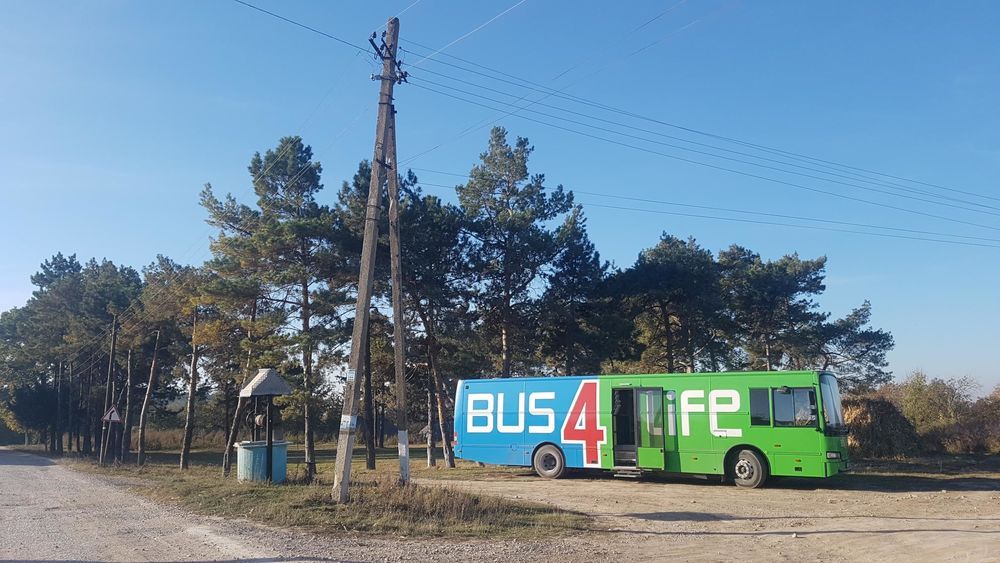 Moldova: Bus4Life is ready for another day of ministry.
Bus4Life was in Moldova for two weeks in October, and visited five villages near the Ukrainian border in the north. Two of the villages had only a few believers in them, and no church.

An older woman, Maria*, told the team she was the only believer in her home village. Every Sunday she travels to a nearby village to attend church. “It’s exhausting,” she admitted to a volunteer who measured her blood pressure on the bus.

There is no public transportation, so Maria pays someone to drive her to church. Spending between 70-100 lei (about 4-6 USD) each week for the round trip is a significant investment. “Five euros would be enough to buy bread for half a month,” OMer Ion Manoli explains. Maria was encouraged to see the Bus4Life team hard at work in her village, and she especially rejoiced in seeing a team of young Christians spreading the gospel.

The team consisted of nine individuals and included young adults enrolled in OM’s Challenge into Missions programme at the OM Moldova base. Bus4Life offers a platform that enables the students to take what they have learned in the classroom out onto the streets. Taking part in outreaches such as this is an integral part of the program.

In another village, the team met Thomas*, a 12-year-old boy who came to the bus with his mother and grandmother. The team members chatted with Thomas about his family and life in general, while his grandmother’s blood pressure was being measured.

“Have you heard of Jesus?” a team member asked the boy. Thomas shook his head. “Do you want me to tell you about him?” the team member continued. “He is very important.” Thomas agreed, and the team member pulled out a children’s Bible. He told Thomas about Jesus and what He did for mankind, and then gave Thomas the Bible as a gift.

Thomas’ mother, Natalia*, who is in her early thirties, is busy trying to make ends meet by working hard every day. She was surprised to find out that her son hadn’t recognised the name of Jesus. “I haven’t talked to him about God because I haven’t known how to do it,” she admitted. “Thank you for reminding me to talk about God with my son. I need to do it.”

Although bringing Bibles and Christian literature to communities where people would otherwise have limited or no access is an important part of the Bus4Life ministry, selling as many books as possible does not get the highest priority during outreaches.

"People in the villages don't have so much money to buy books,” Ion explains. “I'm more focused on evangelism: talking to people. Bus4Life attracts them, and they come and see the books, but it's not the main point. Outreach is the main focus. If we wanted to sell books, we would go to the city where people have more money. But there are already a number of churches there, and our goal is not to reach the reached."

Bus4Life, a ministry of OM, is a multi-functional missions centre that serves the communities of Central and Eastern Europe.

Published: Friday, 22 March 2019
Credit: OM International
© 2019 OM International This email address is being protected from spambots. You need JavaScript enabled to view it.