Over 60 villages and only four churches 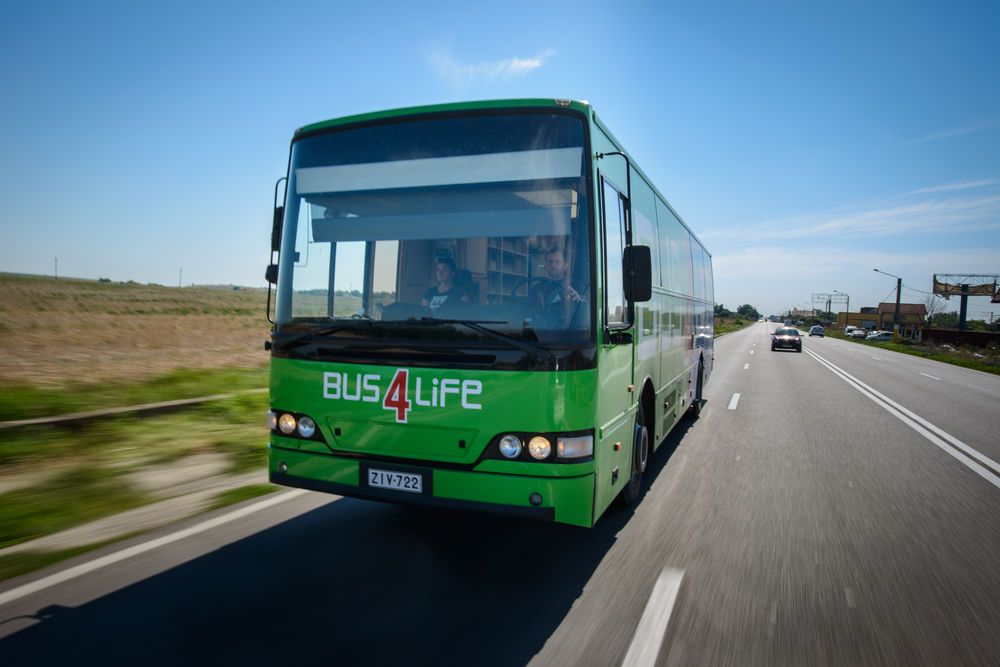 Ukraine: Bus4Life ministers in Eastern Europe. Photo by Garrett N
Bus4Life’s November outreach in Ukraine took place in the northern part of the Odessa province where OM has been supporting a church planting initiative. The area is located just a few hours north of the OM base and may well be one of the least reached areas in all of Ukraine.

One of the outreach days got started in less than desirable conditions as the weather was—according to the team—"horrible, overcast and windy”. It started to drizzle. The children’s program took place outside, and the team had expected that not very many children would come because of the cold weather.

“More than 70 children came!” OM’s Hensie van der Merwe exclaimed. “It tells me about them being curious and somewhat deprived from normal childhood activities—but it also means they are hungry for God.”

The children were greeted by a pirate, welcoming them aboard a ship. The children were asked to help the pirate find an answer to the question, "What is the right way to live?" There were crafts, sports activities, popcorn and trampolines. As the children were participating in the activities, it became clear that very few of them had any basic knowledge about Christianity.

“I have been working with children for twenty years, and I’m always surprised when they have no knowledge of the gospel,” Hensie said. “Ukraine professes to be an Orthodox Christian nation, and yet the children didn’t know what the Bible was.”

After several days of children’s outreach, Bus4Life drove to the biggest town in the area, and partnered with a local Christian organisation called Clear Vision, setting up an eye clinic in three different locations. Volunteer opticians saw about 80 people per day and gave out over 300 glasses to those needing them. The organisation partners with churches on one condition: they only give out glasses if on-going active evangelism takes place while they work.

“Their ministry really works well with Bus4Life and the literature ministry,” Hensie said. “After all, you can’t read if you can’t see.”

New Testaments and Christian literature, including children’s Bibles, magazines for teenagers and George Verwer’s books (in Ukrainian) were handed out. A local pastor talked with people.

Nine days of ministry with Bus4Life impacted the local OM team, opening their eyes to the needs of the northern parts of the Odessa province. With Bus4Life gone, the team returned to the area for a day of prayer. Connecting again with the local believers, the team made a decision to start focusing their church planting efforts to this area.

“We did some research and found out that there are over 60 villages in this particular area but only four churches,” Hensie said. “People live in small villages where the internet connection is notoriously bad. Some villages do not even have cell phone connection. They don’t have access to a church, and they don’t have access to the gospel. They are isolated and cut off from the larger society. Literature ministry in the city may not be seen as useful, but in the villages,  it is the source of information.”

Hensie admitted that without the Bus4Life outreach, the team may not have gotten excited about church planting in the northern Odessa province.

“We saw the reality hands on and realised the potential the bus has because of all the things it offers: shelves, movie theatre, sound system, storage, electricity, a tent—which was an amazing discovery—and it’s all mobile! All these things are so useful when you are out in the villages and don’t know if you will even have electricity.”

The big, colourful bus draws attention. “There is no way people won’t know it’s there,” Hensie said and added, “Of course, we can go to the villages without Bus4Life and do children’s ministry, but it takes a lot of logistics to do that. With the bus, everything we need is already there, and people don’t have to ask where the outreach is taking place. And it’s not just children’s ministry! If we are creative, we can use the bus for so many things: mobilising, church planting, things we have not seen in Ukraine yet. I’m really looking forward to seeing what God can do with Bus4Life."

Published: Thursday, 20 December 2018
Credit: Karoliina Gröhn
© 2018 OM International This email address is being protected from spambots. You need JavaScript enabled to view it.