'The East is the new frontier' 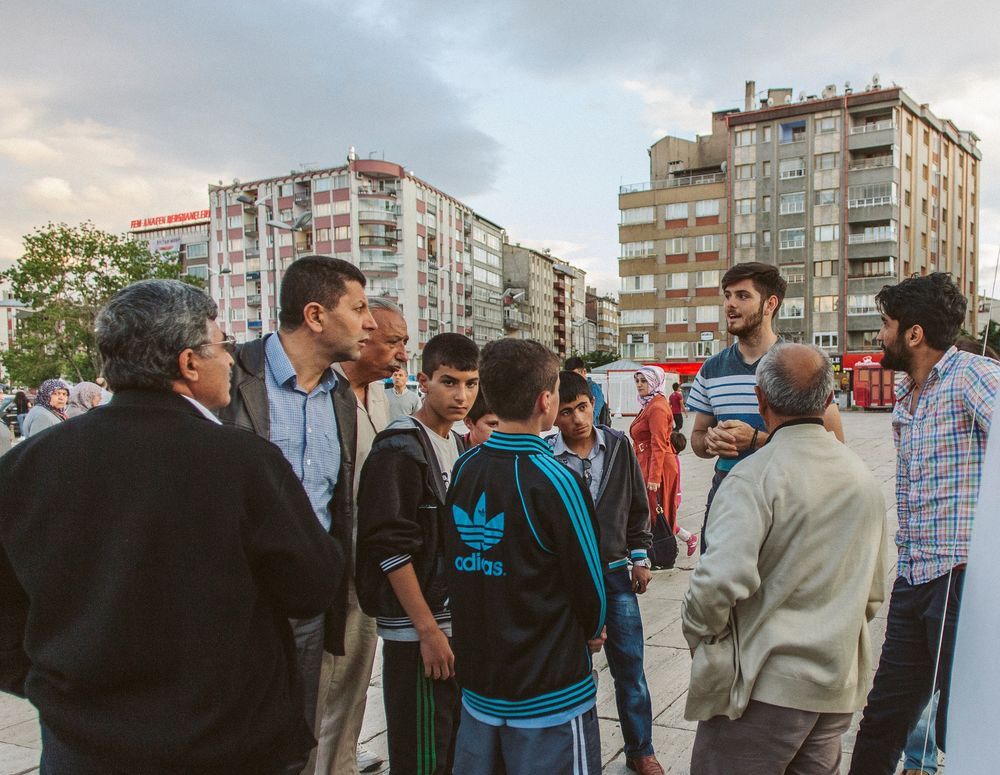 Turkey: The team took many opportunities to talk to people in unreached parts of Turkey during the 2017 outreaches.
OM’s involvement in Turkey began in the early 1960s with the start of the Bible Correspondence Course (BCC) in Istanbul. The BCC has played a role in over 55 per cent of national believers’ journeys of coming to faith.

Today, church planting has come to play an increasing role in the life of OM in Turkey, a country that even in 2019 is still known in mission circles as the ‘most unreached nation in the world’.

One church plant in the East of Turkey—an area best known for its apricot orchards—is a gateway for ministry in the entire region.

“We moved to [the East] specifically because it is literally surrounded by provinces which have little to no access to the gospel. Also, the church is a thriving church, which really wants to reach other provinces for the gospel and is a sending church. We wanted to be part of that vision to send locals and plant churches in every unreached part of the country, particularly in the East,” said worker Berni*, who grew up in Turkey.

After going abroad for university, Berni said the Lord nudged him back toward Turkey—first through some friends that asked him to translate for a Turkish ministry overseas and later to be a representative at a children’s camp facilitated by the same ministry. While there, “the Lord opened my eyes to see the Turkish people, as Jesus said, ‘like sheep without a shepherd.’ I felt that the Lord had blessed me with the language and that I should obey the commandment in Matthew 28 and go!”

Berni’s wife, Carla*, originally wanted to serve amongst the Japanese and studied Japanese literature to help her reach them. But whilst headed to join an outreach in a Muslim country in 2008, Carla’s team got diverted to Istanbul when a war started in their original destination. Hosted by a local family, Carla prayed every day for opportunities to talk to them about Jesus. Those moments made her decide to serve in Turkey instead of Japan, and she returned not long after the outreach.

Berni met Carla in Turkey, and the two got married. “It is wonderful to serve with a person who loves Turkey!” he shared.

“The East is the new frontier for the work as there are millions and millions of people in the East without access to the gospel. So many provinces around us have no churches, no believers and no workers,” Berni explained. “In addition to this, we love the people of this area. They are just so warm and friendly, and you can have a gospel conversation with just about anyone! Why not follow where the Spirit is already in motion?”

Seeing the boldness of new Turkish believers has encouraged Berni in his ministry. One brother, Kadri*, had become disillusioned with Islam when he was 12 years old. A professed atheist, he also led many friends to quit their belief in Islam. Eventually, Kadri met another believer from the church who shared the gospel with him. Though Kadri thought it was ‘crazy talk’, he started having dreams where he heard God tell him, “I am real.” After 30 days of the same dream, Kadri went online to find something about Christianity that he could make fun of. Instead, he found an article on the evidence for the resurrection of Jesus.

“He has never been the same,” Berni described. “He has since shared the gospel with more than 500 people online and continues to preach the gospel with veracity everywhere he goes.”

Despite the growth of the church in the East today, the region has a somber history. On April 18, 2007, three men were murdered for their faith in one of the cities.

During the period between 2004 and 2007, workers living there had seen incredible developments. There was a whole family of believers in one city. The children of this believing family married believing brothers and began to serve around the area.

A publishing house was continuously distributing the good news message in many cities as well, with workers seeking to share the gospel and establish churches in many eastern cities.

Of course, all this activity was not overlooked. Police officers continually stopped the brothers in their activities. In many places, there were good and loving officers, some of whom were interested in the church. But there were also those who hated what was going on.

Suddenly, after the murders in 2007, there was almost no one left in the church in the East. Most of the foreigners had to leave, based on the pressure from their mission companies or from their own fears. Local believers were also dispersed.

Still, the dream of seeing the gospel spread in the East of Turkey continued. Before Berni and Carla even arrived, other workers had been praying for many years that this province would become a sending base for foreign and local believers alike.

“The Lord has shown us that as we have been transparent about who we are and what we are doing…, people are more likely to open up and ask about Jesus,” Berni said.

Praise God in the last 12 months, there have been two visible churches planted in eastern cities! One church is currently run by partners, and the workers in a nearby city do BCC follow up for them. The second church is a direct plant born from a partnership of a local church and OM. Currently the building is not big enough to house the entire church for Sunday meetings. The church would like a bigger place to fit all the believers and interested people into one space. The planting church hopes to send a local couple to the new church in order to do evangelism and discipleship in the next couple of months.

Berni and Carla continue to pray for more foreign and local workers in order to plant visible churches in two other eastern cities before the end of 2019. Meanwhile, they meet with people who have requested New Testaments from the BCC and tell them about Jesus. They also do street evangelism and meet new people who are interested in Jesus and then become believers. “We attempt to immediately have them preach the gospel to their friends and family and be in community with other believers,” Berni said. “We want there to be nobody in our area who does not know that there are Christians who they can find out more about Jesus from.”

Published: Friday, 17 May 2019
Credit: OM International
© 2019 OM International This email address is being protected from spambots. You need JavaScript enabled to view it.