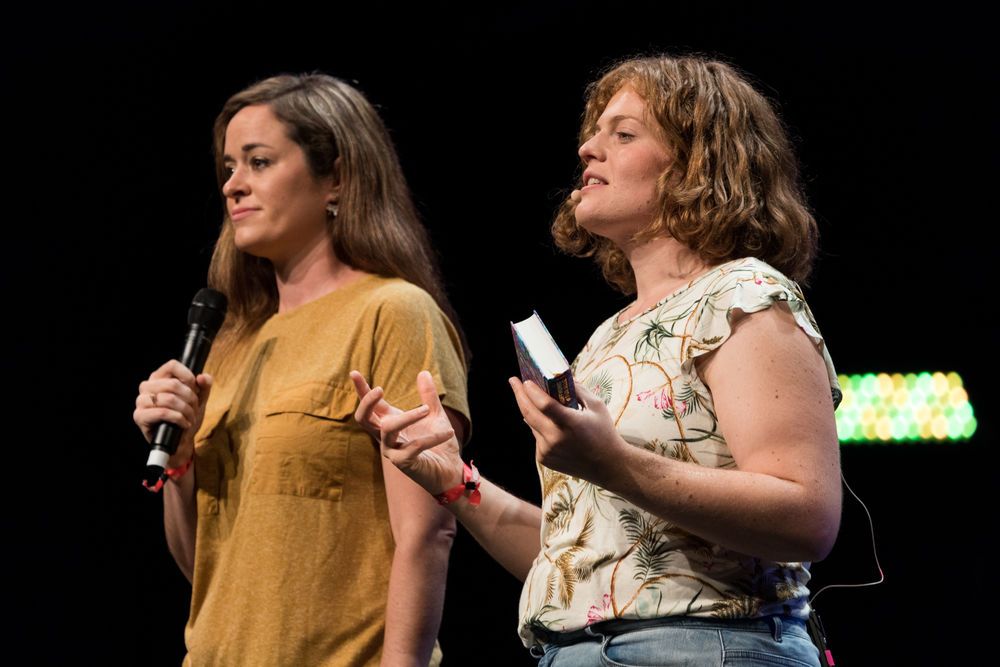 Germany: Agnes translates for the speaker at TeenStreet in Germany into German. Photo 1 of 4.
Everybody at TeenStreet (TS) loves Agnes. She is bubbly, full of joy and when she is doing translation––well, it's like a well-oiled machine. It is clear that she’s very good at what she does, knows her job inside and out and can work under a lot of pressure. But there's more to the story.

Sixteen years ago, there was a teenage girl sitting in Throne Room at TS, feeling confused and a bit heavyhearted. Unlike her friends, she felt like she had no special gifts or a special calling. Questions like: ‘Why am I here?’ or ‘What am I good at?’ were on her heart.

That girl was Agnes and what happened next had a direct impact on her life.

“I was sitting there in Throne Room,” Agnes explains, “and I can remember how Chris, the translator back then, came on stage and started translating. As soon as he started, something inside me went: ‘Wow, this is what I want to do.’ It was in that moment that I became fascinated with the whole process of translating, how two people communicate the same message in two languages."

Agnes enjoyed listening–and watching–the translation on stage and something clicked in her heart. "From that moment on it became something that I carried around with me, this dream of becoming a translator.”

After graduating from high school, Agnes went to Bible school in England where she improved her English and encountered God in a whole new way.

“During my time in England, I got to know God as a loving Father who loves me no matter what I do or don't do. He is proud of me and not disappointed in me,” Agnes says, explaining that it was also during this time that English became her ‘heart language.’ “I still read the Bible in English and I often pray in English.”

Some years later, when Agnes graduated from university–she’s a pharmacist–and moved to Munich, she noticed that the local church she started attending had a translation ministry. “I asked the leader if it would be possible to try translating,” Agnes says. “It was simultaneous translation from German to English and so I got to try it out. I quickly realised that it was quite easy for me and that God had given me this gift of translating. It’s just a lot of fun.”

Agnes started working in the translation ministry regularly and later took over the leadership of the ministry.

"TeenStreet was such a special time for me as a teen that I came back year after year wanting other teens to have the same experience. But somehow I couldn't seem to find my place. Never would I have dared to imagine to one day become the German translator. Now in hindsight, I can see how God prepared me to do what I do now by letting me get familiar with so many areas of TS.”

As she became more experienced with both simultaneous translation and consecutive translation outside of TS, the idea of translating at TS kept coming back to her.

“I just wasn't sure if I should wait for God to open doors for me or if I should go and knock on them saying this is what I would like to do. In the end, it was a mixture of the two."

For the past three years, Agnes has served as the Main Hall translator.

But that is not all. There is much more to Agnes than her ability to translate effectively.

“I am very passionate about experiencing God in everyday life,” she shares. “That’s also my wish for the teens: that they would experience that God is with them wherever they go; that faith is relevant to their everyday life. I hope that they will be equipped here at TS and that they will learn how to live out their faith, trusting God with their lives.”

“If someone has the same dream of becoming a translator, they can approach me,” Agnes encourages. “If you are interested in something, I want to encourage you to keep reaching out for it, asking God for the next steps to take. If it’s translation, come talk to me. Let’s have a chat.”

After many years of being a translator and experiencing what it’s like to use your God-given gifts, what would Agnes say to her younger self, sitting in Throne Room worried about what the future holds?

“There’s a great verse in Isaiah 43:1: ‘Fear not, for I have redeemed you; I have called you by name, you are mine.’ I would say to myself: ‘It is not about what you do, it is about who you are in your identity as a child of God.’ Life on this earth is mainly about being in a relationship with God, enjoying His love and sharing it with others.”

Published: Thursday, 13 February 2020
Credit:
© 2020 OM International This email address is being protected from spambots. You need JavaScript enabled to view it.