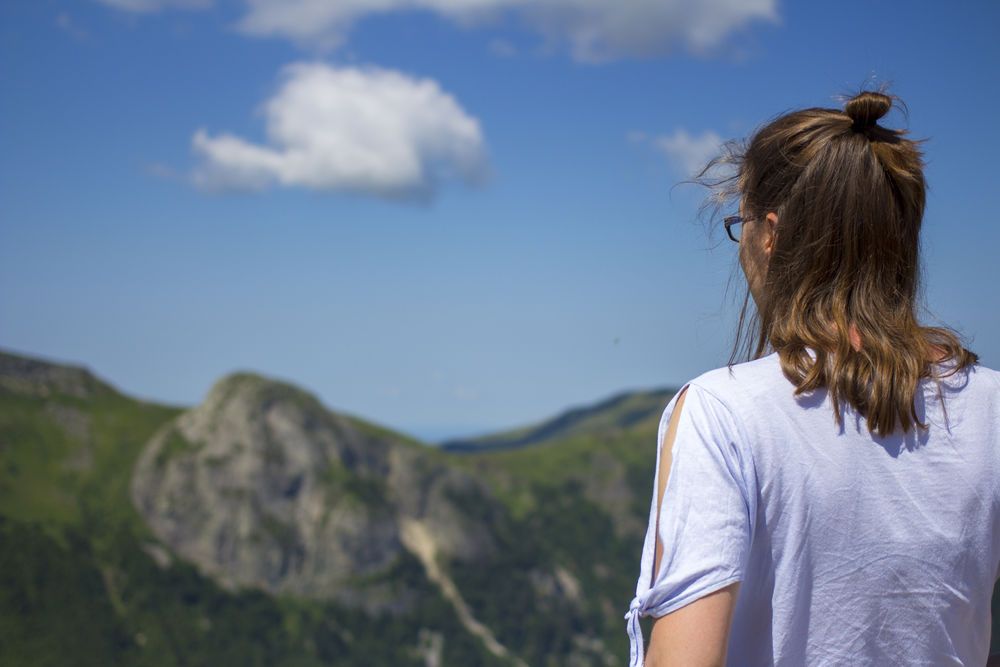 Greece: Intern with OM, she stands and reflects on her three months with OM France studying French and falling more in love with Jesus.
When Natalia* (Argentina), was four years old, her family moved to the United States. “It was 2001 and the economy was really bad in Argentina,” Natalia explained. “So, we moved there to have more opportunities for our family.”

Almost 10 years later, her family moved back to Argentina. Then age 13, Natalia struggled with the change. “Adapting to Argentina was difficult,” Nadia remembered. “The US was home to me, and suddenly everything was different. I was so angry at my family for bringing us back. I liked my life in the States and wanted to return to live there for the rest of my life. It was my biggest dream.”

Because her family has Italian heritage, Natalia’s family applied for, and received, Italian citizenship and passports two years later. Natalia believed this would be her way back into the States, so she saved money and purchased a ticket. Her last step was an interview for going to the States long-term, and the final question asked if she'd ever been there for an extended time before.

“Because of that question, my application was rejected two weeks before I was supposed to leave for the States,” the 22-year-old said. Natalia was heartbroken, and it was in this time that she felt like God spoke to her.

“I read the story of the rich young man in Matthew 19:16-30, who having followed the Law perfectly, asked Jesus what else he needed to do to be saved. Jesus told him to sell everything he had, give it to the poor and follow Him,” Natalia remembered. “I also read the book Radical by David Platt, which also talked about this theme.”

Over the next few months, as she spent time in the Bible, she gained a whole new perspective of God and what it meant to be a Christian.

“I realised I was chasing my dreams and I wasn’t chasing Jesus,” Natalia shared. “I saw then that He was worthy of much more than me living where I wanted to live in my dream lifestyle. Jesus was worth even more than my greatest dream.”

Slowly, the dream of returning to the States faded and eventually disappeared from her heart. Then, God gave her a new dream: going to the mission field.

“He took the old dream, one of me living in comfort and pursuing my heart’s desires and replaced it with one where I could potentially live even less comfortably in the future. He just redirected everything. That’s something only God could have done in me.”

With new purpose for her future, Natalia began taking active steps in preparing for the mission field. She began studying to become an English teacher and saving money however she could, even if it meant sacrificing something she wanted or an event she wanted to go to. She also sought advice from her pastor, who recommended going on a short-term mission trip. Then, someone in OM suggested she pray about serving refugees in Greece.

“As I prayed about it, God started showing me that refugees were like myself as a teenager. I knew what it was like to be from a different country and try to adapt to a new one I didn’t really want to be in. While I couldn’t understand the horror of leaving my country because of war and having a long, arduous—and terrifying—journey to a new one, I felt I could relate on a certain level.”

Between the money she’d saved and donations from her church, Natalia was able to go to Greece in January 2019. During her month-long trip, she spent time serving at refugee churches, as well as at two different refugee camps. Her tasks were varied—helping long-term workers, cleaning and folding clothes, taking care of babies, teaching classes and any other way she could share God’s love through practical service.

“When I met the refugees and heard their stories, I empathised. I understood how they could be sad because of missing their home countries. But they were in Greece because they were looking to survive.”

“These were stories of how they spent two years moving from one country to another, trying to get to Greece, through endless nights, dark oceans, being lost, even trying to swim and losing family members along the way. I was amazed. These stories were real. They are happening right now, in 2019. I’d never seen it so close to me. I’d seen it on TV or online, but it was completely different to hear people right in front of me tell of their journey just to survive. All my worries seemed tiny from that moment on.”

Now back in Argentina, Natalia has renewed purpose in her studies to be an English teacher. “I want to be able to teach English or translate for anyone who needs it or doesn’t have access to it, like refugees. They always need English teachers in refugee camps, because some of the refugees are trying to enter a society where they don’t speak the language," she said.

Natalia loves Muslim people and working with vulnerable people groups, so she's open to returning to Greece or going somewhere else to do that. “I’d love to start studying theology as well,” she shared. “Right now, I’m trying to read as much as I can, but I’d love to go somewhere and learn.”

Has God ever redirected your life? How does Natalia’s story encourage you to share His love with others? Click here for more information about how you can serve God amongst refugees! https://www.om.org

Published: Wednesday, 04 December 2019
Credit: Kate Toretti
© 2019 OM International This email address is being protected from spambots. You need JavaScript enabled to view it.

United communities of believers reflecting Christ in the world

OM Greece's involvement with refugees is always evolving. This summer the team is able to work in more camps and connect with more people.

Fion Lau, from Hong Kong, shares about her year serving with OM in Greece.

An OM Greece worker explains, while she is babysitting, how she helps ladies involved in human trafficking and the sex industry.