'God didn't open my way, He wanted me to depend on Him' 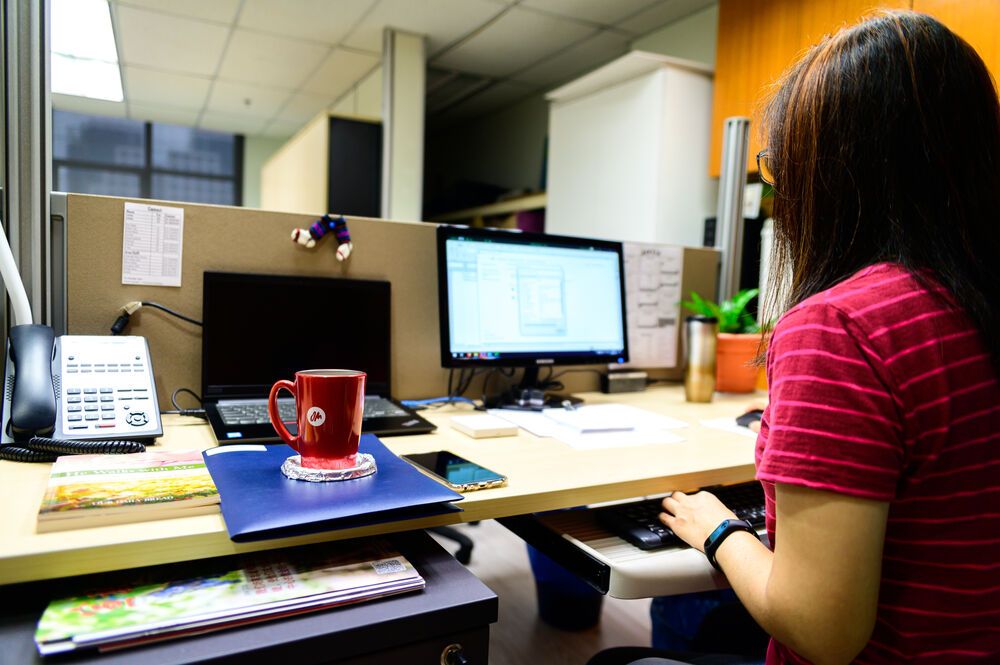 Malaysia: Office worker working away in the office.
He Ping* stood at a crossroads. She had received an opportunity to join OM, but this would mean abandoning her job and launching into economic insecurity when even her local church could not support her. Even more troubling, in a culture that places the utmost importance on respecting parents, elders and ancestors, He Ping would need to directly disobey her parents, who feared her potential loss of income.

“I’m someone who is very soft-hearted,” He Ping says. “If someone says don’t do that, I’ll just stop.  But with this decision, I told myself, I have to be strong. I need to take this step. I need to surrender everything to God and allow God to take over.”

A soft-spoken, Malaysian-born Chinese with a love for Korean dramas, He Ping became the first Christian in her family. As a kid, her parents sent her to Sunday school to learn English, and she also attended a weekly Christian fellowship at her high school.

The joy she saw in her friends’ lives and the kindness they showed through taking her to church every Sunday convinced her to accept Christ’s love into her own life, though she immediately faced resistance from her parents, who feared their daughter’s new faith would derail the family’s traditions.

But the love of God had irresistibly captured He Ping’s heart, and soon, this love began to transform her everyday life. She began to wrestle with the cultural implications of the gospel, particularly the ethics of eating food offered to idols, eventually concluding that she would continue eating the sacrificed food as long as she could pray over it as a blessing from God. As time passed, her parents gradually accepted the fact that their daughter had become a Jesus follower for the long haul.

After becoming a Christian, He Ping worked for many years in administration, sales and management. She also became very involved with her local church in supportive roles: “I’m not a [front] stage person,” she says, emphatically. Her first short-term missions trip, a church-sponsored outreach to a remote tribe in East Malaysia, sparked a desire to work in missions.

Eventually, He Ping learnt about OM from a Malaysian couple who had served in Northern Africa and who spoke at her church. They mentored her and paved the way for her to enter missions full-time; in 2007, He Ping decided to join OM, surrendering her parents’ obstinacy and her precarious finances to God.

Still, she avoided telling her parents until she had already resigned her job, making her new role inevitable. Soon after her decision, the church that had been unable to support her now announced that they would provide 50 per cent of her required funds, and the OM in Malaysia office promised to help her raise the rest.

Today, He Ping supports OM workers in East Asia through administration, finance and IT–office work that some might see as tedious, but what she views as a tangible way to care for her team. Her work is particularly crucial for those working in repressive countries, where physical safety may boil down to the security of a thumb drive or the integrity of a phone line.

As for family relationships, she has found ways to accommodate her parents, providing them with a monthly allowance and paying for their house utilities. “This helped them understand,” she says.  She also recognises that she has more to learn about balancing work with time with family. “In every stage of the Christian life,” she says, “we don’t stop learning.”

As she encounters each new stage in her journey, He Ping has not forgotten the lesson about surrender that she internalised ever since her decision to join OM 12 years ago. As she reminisces on that event, she describes her desire to become financially secure before entering ministry full-time.

“But that was my way,” she says, making a karate chop motion with her hands to emphasise her words. “God didn’t open my way. God wanted me to depend on Him.”

“I don’t need to worry about anything,” she concludes, “because God knows what’s best.”

Published: Thursday, 07 November 2019
Credit: Chris Kuo
© 2019 OM International This email address is being protected from spambots. You need JavaScript enabled to view it.

Young believers among the indigenous people in the rural areas of Sabah, Malaysia are impacted through discipleship.