'Don’t you need us anymore?' 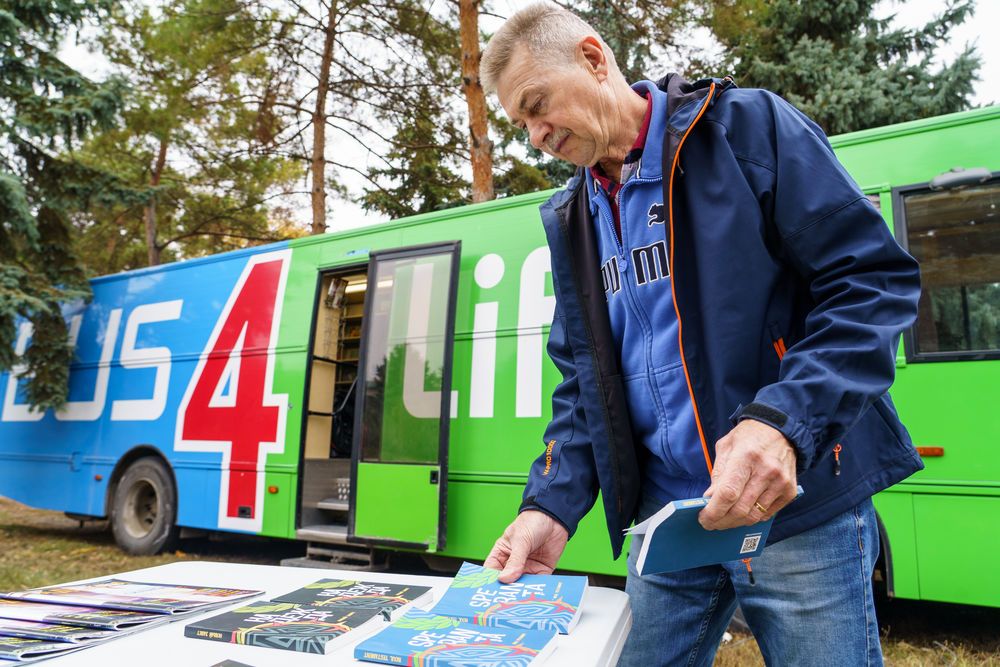 Finland:
“For years we asked God: ‘Don’t you need us?’” Terttu Venäläinen says. She and her husband, Risto, just returned home to Finland after serving with OM’s Bus4Life ministry for two and a half months in Eastern Europe.

‘Home’ for the couple has always been Northern Savo, a province in Eastern Finland, where both of them grew up surrounded by the area’s vast wilderness. The rather remote setting offered each a safe place to grow, yet their lives seemed to head in very different directions in their teens.

Terttu, who grew up in a protective Christian family, publicly professed her personal faith in Jesus at the age of eight. By the age of fourteen, she was already firmly rooted in her faith and knew for sure that “this was the way” for her.

Risto’s life began to unravel around the age of 12 when he was enrolled, against his will, to a new school and he ended up failing both Swedish and German. “I’m just not built for learning foreign languages,” he admits. Because of the difficulties in school, Risto started experimenting with alcohol and tobacco. He dropped out of school completely by the age of 16. “I never graduated. I got five fives (the lowest passing grade) and I failed Religion, which is why I didn’t get a diploma.”

At the age of 20, Risto was not only continuing his substance abuse but also committing small crimes. One such night resulted in an arrest and Risto ended up spending the night in jail. Because of his young age he was put in touch with a social worker who turned out to be a believer. “He gave me the Gospel of John which I promised to read,” Risto recalls. “God then led me to a meeting where I met the social worker again. He led me to Christ. That one night changed everything for me. My entire life changed completely.”

In November that same year, Risto got to know then 18-year-old Terttu. “I had gone out with her brothers and ended up talking with her at their house,” Risto says. “The conversation ended with the two of us choosing a date when we would get engaged.”

“Dating was not something my [church] culture accepted,” Terttu says, explaining the rush.

The young marriage got off to a rough start. “If anyone would have asked either one of us a year into the marriage, we would have both said it had been a terrible mistake,” Risto admits. “Our backgrounds were so different. Terttu had not been anywhere, and I had seen and experienced the world.”

But both Terttu and Risto wanted to follow Jesus. So, they prayed and kept bringing everything to God. They continued attending every possible church meeting and were ready to share their testimony whenever asked. Their church carried them and supported them through the difficult years. Slowly, things started getting easier and they found a way to discuss their problems.

Some years later their small church got involved in literature ministry in Communist Eastern Europe. The Venäläinens took an active role in the ministry and started making regular trips out of the country. After the fall of the Berlin Wall, their focus shifted from literature ministry to evangelism.

The couple’s motivation to share God’s love traces back to a single sentence spoken on their way back to Finland many years ago. “As far as we know, there isn’t a single born-again Christian living in these villages,” someone in their group said as they passed small villages near the border of Finland. “It touched me so deeply that the following summer we went back to the villages with a group of twenty people to do evangelism,” Risto says. “That was the beginning of a regular ministry that went on until churches had been planted in the area.”

Throughout the years of ministry in Eastern Europe, Risto and Terttu continued working in Finland and raised three children together. Then, rather abruptly, their church’s involvement in the ministry came to an end. Life quieted down and Risto and Terttu found themselves asking God: “Don’t you need us anymore?”

In June 2019, Terttu noticed a job listing in OM’s magazine in Finland. The Bus4Life ministry was looking for a driver to drive the bus for two and a half months. Risto had served as the second driver for Bus4Life for two weeks in 2015, so the couple was already familiar with the ministry that seeks to share God’s love through literature and evangelism in the towns and villages of Eastern Europe.

Terttu told her husband about the opportunity, asking if he’d be interested in it. “Sounds good,” he responded and asked his wife to call the OM office. Risto’s rather swift response may have had something to do with him misunderstanding the length of the commitment. He thought the need was for two and a half weeks, not months. He did not realise the mistake until he was on the phone speaking with the Finnish office.

“[When I understood the length of commitment] I first thought that it would completely mess up the autumn moose hunt,” Risto recalls, “but at the same time I figured if it’s possible to do something for God with these skills, then why not.”

Risto and Terttu joined the ministry in September and spent the following months travelling around Ukraine, Moldova, and Romania. Risto served as the driver and Terttu worked alongside her husband, helping with navigation, set up and everything else. Both enjoyed working with the local teams tremendously and were encouraged and inspired by the faithful service of the believers they met in each country.

As to the question about God needing them, “This was the answer,” Terttu says. “We are so grateful that God gave us this opportunity. These months made a lasting impact on us and we are willing to continue serving with this ministry.”

Published: Wednesday, 12 February 2020
Credit: OM International
© 2020 OM International This email address is being protected from spambots. You need JavaScript enabled to view it.

Bus4Life ministers in Central and Eastern Europe, bringing hope and Christian literature to the region's widespread towns and villages. During the spring and early summer of 2018, Bus4Life visited Hungary, Moldova,...

Wanted: an adventure-loving, open-minded driver. Esa was that driver.

An Iranian refugee surprises a long-term worker by stating his desire to become a Christian.