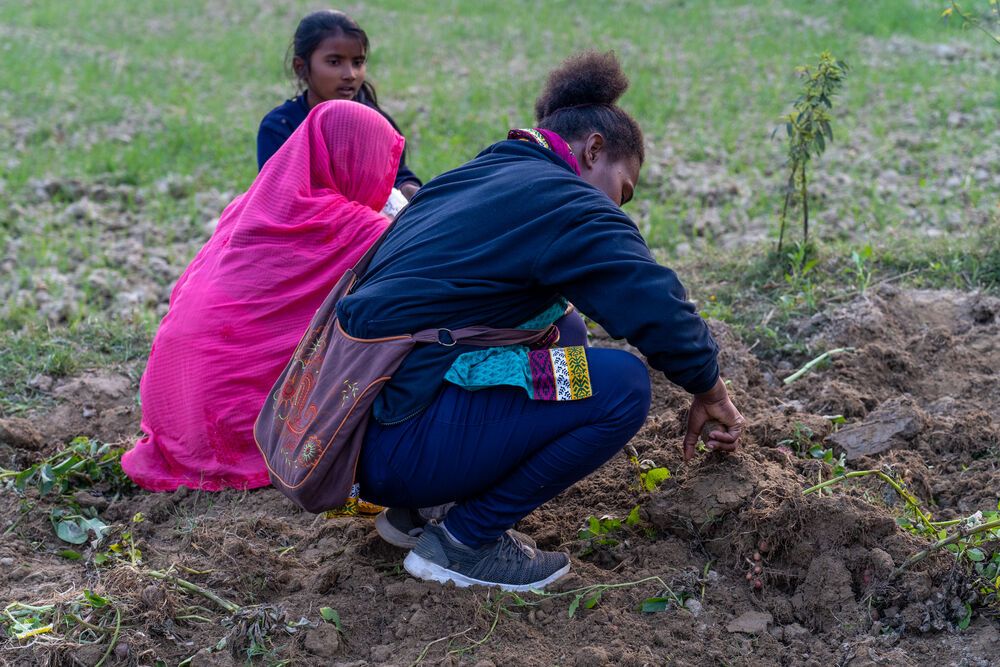 South Asia: Rachel, Papua New Guinea, spends time with people in South Asia. Photo by Rebecca Rempel.
It certainly wasn’t easy to get to the village. After a full day travelling on a packed bus, Rachel* (Papua New Guinea) and her trek partner spent another day driving down a bumpy trail in a jeep before walking the final leg of the trip with local porters accompanying them. The journey may have been long, but it was worth it to Rachel. The people were worth it.

Rachel was part of a small group who trek to remote villages in South Asia in pairs to share the good news. They spend time with people, talk and distribute literature and SD cards with resources in the local language as a way of planting seeds of truth.

Upon arrival in the village, Rachel quickly arranged accommodation. As guest houses or hotels were mostly non-existent in the villages Rachel had trekked to, she was used to staying wherever her hosts offered — most commonly a storage room.

Having just harvested the corn from their fields, people in the village were busy removing the kernels from the stalks and drying them out in the sun. Rachel took the opportunity to work alongside the women, helping them with their tasks while striking up a conversation in the local language. Rachel learnt a lot about the culture and everyday life by showing a genuine interest in what people were doing and found that, in turn, people were interested in her life.

After sharing a bit about herself, Rachel turned the conversation to what she believes — Jesus Christ. When she felt the women were ready, Rachel offered them literature written in their language that explained the good news. To those who could not read, Rachel urged them to find someone who could and get them to read it aloud. And so, the Word of God is spreading in remote places.

Leaving the village a few days later, Rachel and her friend came across herders watching over their grazing cows and buffalo. The two men were curious about what they were carrying, and Rachel’s porter explained they had a gift for people. Rachel took out two books that talked about who Jesus is and gave one to each man. Rachel and her group continued walking down the path until Rachel heard something and turned around to listen. One of the men had opened his book and was reading it loudly to the animals and jungle surrounding him.

“People need to hear the name of Jesus,” Rachel said. “That’s what I think when I’m on a trek. If it’s hard, or it’s up and down, I know that I’m not wasting my time — I’m investing my time for people to know God.”

‘Did God really tell you to go?’

Though Rachel grew up in the church, she “didn’t really know who God was. I was following what my mom and other people did,” she said.

It was at an Easter Camp for teens that Rachel realised she didn’t have her own personal relationship with Christ and, what’s more, that she wanted one. At that time Rachel felt unsatisfied with her life, going to parties and seeking to win the approval of her friends. The message that Jesus had already paid the price for her sins really hit home and Rachel dedicated her life to the Lord.

A few years later, Rachel attended a missions conference. “The only thing I knew about missions was going to share the gospel and that there are many people who are hungry and don’t have food to eat,” admitted Rachel. At the conference, she learnt that missions was so much more and felt challenged. “Like I must go,” she said. “Every day back at home the dream of [going overseas] started burning in me. Every day I was thinking about it.”

Rachel went to Bible School to help prepare herself and then began teaching English at a small school. In 2016 she met Lansipe, a fellow Papua New Guinean who was serving the Lord in Mozambique. Lansipe encouraged Rachel to pursue what God had laid on her heart. Rachel knew what that was: sharing Christ’s love with those who have never heard of Him.

It wasn’t easy to get to South Asia. Rachel remembered that people questioned her and asked: “Did God really tell you to go?” In these moments of doubt, friends helped remind Rachel not to give up. “My uncle was always like: ‘If God called you, then why would you want to say no? You will go through these situations and out of those. God will make a way out for you.’”

After two years of selling food and handicrafts at fundraisers, working on her family’s coconut plantation and speaking at churches, Rachel flew to South Asia.

“Before coming here I had never shared the gospel with people; I had never handed out a tract before, but I started to gain confidence. I really enjoy it now,” shared Rachel.

Rachel often took her Bible in the local language out to go talk with people. As she was learning the language, she would ask people to read a piece of Scripture for her and ask what they thought it meant. This proved to be a good method of connecting with people, sharing about Jesus and practising her language skills.

Now back in her native country, Rachel looks forward to continue using what she learnt in South Asia in her everyday life.

“I feel like South Asia is a place that really helped my life to grow,” Rachel said. “In building relationships with people, I feel like I need to show love to them because God loves me.”

With travel restrictions in place in order to stem the spread of the new coronavirus, treks are no longer taking place at this time. Though unable to physically go out and spread the good news, workers are still intentionally connecting with people and building relationships over the phone as well as encouraging believers in their faith. The team is also taking this opportunity to study the Bible together, grow closer and prepare for the future.

Published: Tuesday, 12 May 2020
Credit: Rebecca Rempel
© 2020 OM International This email address is being protected from spambots. You need JavaScript enabled to view it.

OM's emergency assistance was the first help families had received since the severe flooding across Bangladesh. For many it came just in time.

COVID-19 has not stopped God's work in remote places in South Asia.

“After interviewing these women, I realised that their stories impacted me way more than I expected them to,” admits Ava. “It gave me a glimpse of the true reality of...