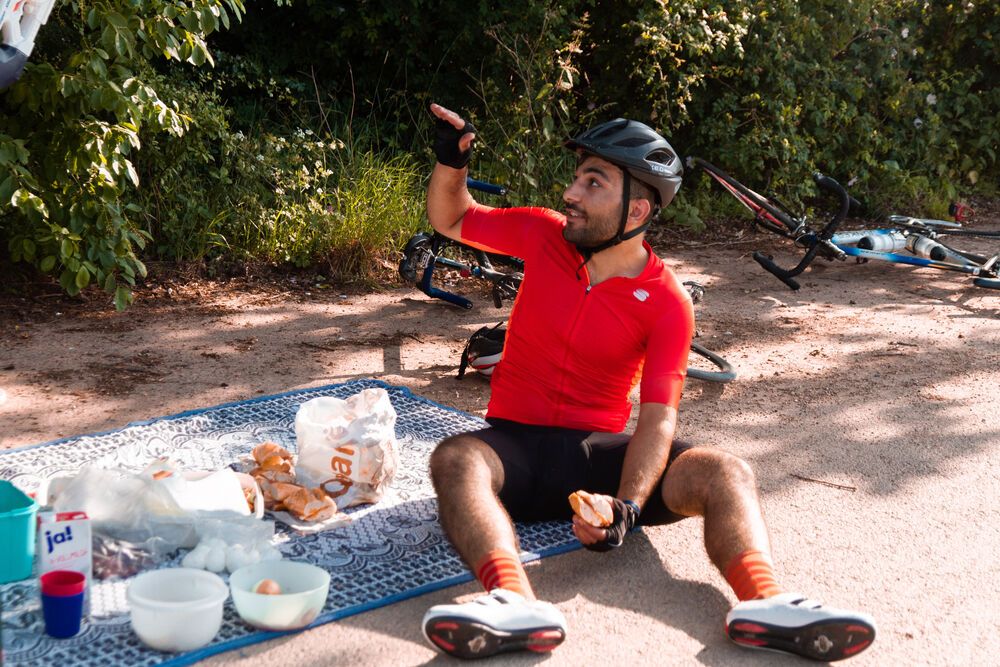 Germany: Mo talks to a team member during a break in the 1,000 km Coronaride across Germany. Photo by Antonia Leanne (used with permission by Kontakt Mission)
Mohammed (Mo) didn’t think twice when his friend and mentor, Tobias, told him about the 1,000 km (621.3 miles) ‘Coronaride’ happening in a few weeks. “Sure, I’m in,” Mo said, regardless of the fact he’d only started riding road bikes several months earlier. Though this type of challenge is often reserved for experienced cyclists, Mo was eager to participate and – through cycling – to help people impacted by the new coronavirus.

At the time of the ride, Mo, a friend of OM who lives in Germany, didn’t personally know anyone who had fallen ill with the virus, but his sister in Syria had seen it devastate families. “In Syria, it isn’t like in Germany where everyone has insurance. In Germany if you don’t go to work, there’s an office that can provide [financial] help,” he explained. Whereas in his homeland, “when you don’t work, you don’t get any money, and if you work, then you [might] get coronavirus.

“It’s a hard situation. People choose to go to work and risk getting sick rather than having their kids come and tell them they are hungry,” he said.

Once he agreed to the Coronaride, Mo started training with Tobias. First a 200 km ride, then 300 km. Both went well. “My knees hurt a little during the 300 km ride, but I thought they’d be OK after two weeks of rest,” Mo said.

When the event arrived on 12 June, the first day went well. Mo and Tobias spent 17 hours and 22 minutes on their bikes (over 20 hours with breaks). They slept for about three hours and started again on 13 June at 03:00. Around 08:00, Mo’s knee started to hurt, and he had to stop and rest in the support vehicle.

“After I injured my knee, the physiotherapist said I could forget riding further,” Mo shared.

Behind the scenes, however, well over 100 people were praying together virtually. As news of Mo’s injury trickled into the WhatsApp group where many were posting prayers, people began lifting him up. After two hours, Mo got back on his bike, completing both that day and the next without pain. “Praise the Lord,” he said. “It was simply a miracle that I could keep riding until the finish line.”

Besides Mo’s healing, Tobias credited prayer with protecting other riders dealing with injuries, preventing accidents along the way and preserving the spirit of unity amongst the team.

“Everyone was motivated to encourage each other: We can do this together,” Mo added. “that was really cool, and I don’t think it came from us by ourselves.”

The community spirit he experienced during the Coronaride was particularly striking for Mo, who said he has struggled to form meaningful friendships since he moved to Germany four and a half years ago. “Missions is the most important thing for me,” Mo noted. “Unfortunately, I’m alone.”

At first, his physical location didn’t help. Arriving in late 2015 amidst the influx of refugees into Europe, Mo was resettled in a Bavarian village “at the end of the earth,” Tobias described.

“If you wanted to go shopping, it took 20 minutes by car,” Mo said – an eternity compared to most European cities where essentials can be accessed on foot.

In early 2017, Tobias and other OM workers organised a series of retreats for Muslim background believers who had recently arrived in Germany. Another couple, who had spent more than two decades serving in the Middle East, knew Mo’s family from their time in Syria and invited him and his father to the first retreat. “We baptised them together at the end of the retreat. That’s where we met,” Tobias explained.

Mo then came to the second retreat to help with childcare. Soon, one of the workers organising the retreat helped Mo and his father move to Mosbach, close to the OM office. There, Mo met Tobias’ son, and the two hit it off, spending time with each other and working out together. When Mo became interested in racing bikes, he started riding with Tobias, a leader in OM and an avid cyclist.

At his job, Mo has found it challenging to live out God’s love. His colleagues regularly make fun of him for his beliefs. “I always try to hold onto what it says in the Bible and do those things,” he explained, including persevering through the difficult situations he faces daily at work.

Mo was able to share the good news with a former co-worker from Kazakhstan, however. “He was my friend first, and then we worked together in the same company,” Mo explained. “We always talked about faith.”

The man’s wife was also a believer, but he remained unconvinced. “When he had questions, he’d always ask them, and what I knew, I would answer. And when I didn’t know the answer, we’d go together to a pastor and ask,” Mo described.

One day, his colleague said: “Mo, I prayed yesterday.”

“You pray all the time,” Mo responded.

“Yesterday I prayed differently. I gave my heart to Jesus.”

That statement overjoyed Mo. “That was one of the best days of my life,” he remembered. “It’s a feeling that you don’t forget. I’d like to have it again.”

As a young man in Syria, Mo watched his father come to faith, followed by his mother and siblings. Mo participated in the house church his family hosted, but never personally decided to follow Jesus. One morning, Mo went to his job. He and his boss were completing some tasks outside. “Suddenly, there was an explosion 300 metres away from us. Our whole factory collapsed. …72 people died,” Mo recalled. “If I had been in the factory, I would have died, too.”

Thankful to be alive, Mo surrendered his life to Jesus.

With new passion, he participated in a small group on Friday evenings, studying the Bible and memorising passages. “We didn’t have to [memorise verses], but we were gladly allowed to, and in recent times, I’ve noticed that this is very important when you learn a verse by heart and know its reference,” he said. “That was a cool experience to grow closer to God and get to know Him better.”

In Germany, being part of a youth group has helped Mo grow in his relationship with God; still Mo said that others in the group don’t dare go out on the streets to talk to people about Jesus. “Some say: ‘I don’t have this gifting,’ but I’m totally convinced that no matter what kind of gift you have, you can share God’s love through this, no matter what,” Mo explained.

Two days after Mo completed the 1,000 km ride, he hopped on his bike again. The other Coronaride cyclists are still in contact, Tobias shared, brainstorming the next possible challenge and fundraiser. “I hope we can do another one next year,” Mo said.

Beyond cycling, Mo’s goal is to move someplace where people have never heard about Jesus, “but because of my passport and identification, I can’t, not yet,” he explained. “My ultimate goal is to help people, not only to ride bikes for people, but to go.”

Published: Monday, 10 August 2020
Credit: Nicole James
© 2020 OM International This email address is being protected from spambots. You need JavaScript enabled to view it.